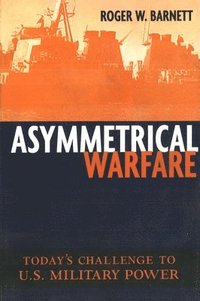 av Roger W Barnett
Häftad Engelska, 2003-01-01
189
Köp
Spara som favorit
Skickas inom 10-15 vardagar.
Fri frakt inom Sverige för privatpersoner.
In this concise and penetrating study, Roger Barnett illuminates the effect of operational, organisational, legal, and moral constraints on the ability of the U.S. to use military force. As the tragic events of September 11 demonstrated, potential adversaries can take advantage of these limitations, thus spawning "asymmetrical warfare." Barnett defines asymmetrical warfare as not simply a case of pitting one's strength against another's weakness but rather of taking the calculated risk to exploit an adversary's inability or unwillingness to prevent, or defend against, certain actions. For instance, launching chemical, biological, or suicide attacks; taking indiscriminate actions against critical infrastructure; using hostages or human shields; deliberately destroying the environment; and targeting non-combatants all constitute possible asymmetrical warfare scenarios. Against these acts, the U.S. has not prepared any response in kind. Indeed it either cannot or will not undertake such responses, thus making these attacks especially difficult to counter. This refusal to retaliate in an "eye for an eye" fashion complicates the dilemma of American policy makers who seek to wield power and influence on the world stage while simultaneously projecting a peaceful and benign image. Barnett concludes that the U.S. must create a formal system of selectively eliminating the constraints that dictate their response to certain situations or scenarios. Failure to make such changes will only increase paralysis and, when the use of force is required, contribute to the already heightened risks.
Visa hela texten

"[Barnett's] argument is vigorous and challenging. . . ." "Asymmetrical Warfare" could not be more timely. The rules of warfare of the twentieth century have proven no match for the challenge of the twenty-first. This book brings challenge and response into balance. "Asymmetrical Warfare" is a must read for citizens and policymakers wondering how to think about the new strategic environment. Thoughtful, provocative, and well-written, it is strongly recommended for anyone concerned about how to fashion effective responses to post-September 11 challenges. Dr. Barnett succeeds brilliantly in giving clarity and analytical rigor to a term that has become trite and ambiguous, while at the same time showing how the United States handicaps itself in dealing with threats of asymmetrical warfare. Roger Barnett shows us how and why America is vulnerable to the cunning plans of enemies who think and behave asymmetrically. All too often, asymmetrical warfare is just a fashionable and rather empty buzzword. But not here. With strategic analysis of a high order, the author explains our problem and offers timely advice on how we can perform effectively against asymmetrical perils.

Roger W. Barnett, Ph.D., is an award-winning author and professor emeritus at the U.S. Naval War College in Newport, Rhode Island. A retired U.S. Navy captain, he held a variety of posts while on active duty, including the command of a guided-missile destroyer and the head of both the Strategic Concepts Branch and the Extended Planning Branch in the Office of the Chief of Naval Operations. He has published numerous essays, articles, and reviews on naval affairs, national military strategy, arms control, and security policy. With Colin S. Gray, he coedited Seapower and Strategy, published by the Naval Institute Press in 1989. He lives in Newport, Rhode Island.