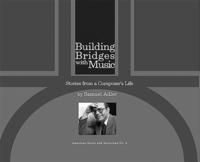 Building Bridges With Music - Stories from a Composer`s Life

Stories from a Composer's Life

av Samuel Adler
Inbunden Engelska, 2017-06-30
549
Köp
Spara som favorit
Skickas inom 10-15 vardagar.
Fri frakt inom Sverige för privatpersoner.
"After over sixty years of teaching and finally retiring for the third time in May of 2016, I felt the urge to write down the many stories I have experienced during my long life. This book covers occurrences from my early childhood in Nazi Germany, emigrating to the United States at age ten, my education on the high school and college levels, my years in the army (an education, to be sure, albeit of a different kind), as well as the many professional experiences as a composer, conductor, teacher, author and administrator both in America and abroad. I have tried to relate the many encounters with some of the most important personalities in the world of music, the other arts, academia, religion, and even politics. My life has been blessed with a most supportive family, many good friends, and a host of students who have made my teaching years rewarding and colorful. Building Bridges with Music seems to have been part of my destiny and I have embraced this enthusiastically whenever the opportunity presented itself. I invite you to have this experience with me through this book." --Samuel Adler
Visa hela texten

Charts [Samuel Adler's] long life in this inspirational and lavishly produced book replete with charming anecdotal stories and many interesting photographs. STRINGENDO, AUSTA NATIONAL JOURNAL Adler's storytelling takes you straight to the heart of significant scenes from his remarkable life. Destiny, talent, passion, zeal and a touch of "workaholism" have placed Adler in key positions to witness events shaping America's 20th and 21st-century musical history. His keen observance and amazing memory make this an extremely thorough account of modern musical life -- at the top of the heap. This transcends other memoirs by the normity of its scope and the intimacy of its details. . . . Such even-handed and honest storytelling of a life so rich offers contemporary commentary with the benefit of hindsight. AMERICAN MUSIC TEACHER [C]oncise, compelling, and down-to-earth. . . . an engaging read. NEW MUSIC CONNOISSEUR Told with the same honesty and passion [Adler] brings to his teaching, this volume is both entertaining and instructive, and sure to be an important primary source about American's new music scene in the America of the 20th and early 21st centuries. JUILLIARD JOURNAL [Evan Fein] [A] fascinating book for anyone who has any interest in history or humanity. . . . [E]xtremely well-written. . . . Though his music is well-documented here and his philosophy of composing explained, I can imagine someone enjoying this book who had no interest in music whatsoever. . . . For his part, the composer concludes at the end of his lavishly illustrated book that his life has been ruled by the Jewish concept of tikkun olam -- healing or repairing the world so that by our life's work we would leave the world a better place than when we depart from it. Nobody who reads very far in Building Bridges will doubt for a moment that this is exactly what Samuel Adler has done. SPECIAL TO THE BLADE