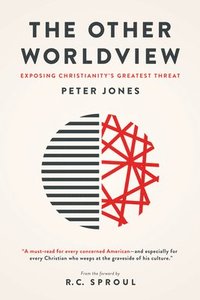 av Peter Jones
Häftad Engelska, 2015-06-24
159
Köp
Spara som favorit
Skickas inom 7-10 vardagar.
Gratis frakt inom Sverige över 159 kr för privatpersoner.
Finns även som
Visa alla 1 format & utgåvor
A must-read for every concerned American--and especially for every Christian who weeps at the graveside of his culture. --R.C. SproulA cataclysmic change has occurred as our culture has shifted toward belief in "Oneism."Every religion and philosophy fits into one of two basic worldviews: "Oneism" asserts that everything is essentially one, while "Twoism" affirms an irreducible distinction between creation and Creator. The Other Worldview exposes the pagan roots of Oneism, traces its spread throughout Western culture, and demonstrates its inability to save."For bodily holiness and transformed thinking . . . we depend entirely on one amazing thing: the incredibly powerful message of the Gospel to a sinful world, which is the ultimate expression and goal of Twoism. The only hope is in Christ alone."
Visa hela texten

The Christian faith's battles are sometimes described as "culture wars," but Peter Jones' new book shows them to be nothing less than a war of worldviews. Peter is spot on when he identifies the philosophia perennis as underlying the seductive paganisms, ancient and modern, Eastern and Western. The monism and pantheism inherent in such views fail to distinguish between the Creator and the creature, the One and the many. The Bible's worldview is quite distinct from the rest of the ancient East, and the contemporary West's entanglement with "Eastern spirituality" arises out of its rejection of the biblical paradigm. Atheistic secularism is under pressure from the innate human need for the spiritual--and this provides the opportunity for myriad spiritualities that justify any and every promiscuity under the guise of being "non-judgmental." Peter is absolutely right in his trenchant criticism of the desire to reconcile opposites and thus to obscure the difference between good and evil, right and wrong--even, perhaps especially, when this is done in the name of science. Today, we need both a critique of the unexamined assumptions of Western culture and a competent apologetic for the Christian analysis of the human condition in a universe continually dependent on its Creator, who cannot simply be identified with it. We are in Peter's debt for providing such a critique and apologetic in this book. --Bishop Michael Nazir-Ali, President of the Oxford Centre for Training, Research, Advocacy and Dialogue (OXTRAD), and formerly Bishop of Rochester, England The velocity and intensity of the cultural death spiral is overwhelming, yet its inevitable trajectory is affirmed in Scripture. In The Other Worldview, Peter Jones, with careful Biblical analysis, unfolds the inevitable embrace of paganism and its assured dissipation--unless arrested by a God-exalting, Gospel proclamation of both common grace and redeeming grace displayed in word and deed. --Harry L. Reeder, Senior Pastor, Briarwood Presbyterian Church, Birmingham, Alabama This is a key book for understanding the profound worldview shift in all the West (not just North America, but Latin America included). Peter Jones carefully analyzes its religious underpinnings and, in light of the Scriptures, demonstrates that there are only two choices. I highly recommend this work as the mature reflections of a scholar who has dedicated the last 20 years to this topic. --Rev. Bill Green, Executive Secretary, Confraternidad Latinoamericana de Iglesias Reformadas (CLIR), Costa Rica If the 21st century is looking more and more like the gnostic world of the first two centuries, we should be grateful that God has also provided another Irenaeus to go with it. Peter Jones has for decades been a prophetic voice, and here he puts his wealth of wisdom and insight into something of a magnum opus, an Against Heresies for our time--although he would rightly insist on the singular, "heresy," instead of its plural. The Other Worldview is a must-read that brilliantly explains why. --Dr. Brian Mattson, Senior Scholar of Public Theology, Center For Cultural Leadership, Coulterville, California For over two decades, Peter Jones's work has proven indispensable for any Christian who wants to understand how to reach the pagan West with the gospel of Jesus Christ. In The Other Worldview, he helps readers see that there really are only two options available for how we view reality: Christianity and everything else. With the rare and enviable gift of being able to make complex ideas accessible, Dr. Jones shows that the other worldview, in its varied expressions, cannot withstand intellectual scrutiny. --Rev. Dr. Gabriel N.E. Fluhrer, Senior Minister, Shiloh Orthodox Presbyterian Church, Raleigh, North Carolina My good friend Peter Jones argues that the ills of modern culture stem from its denial of the biblical creator-creature distinction. Peter has made this case before, but h

Peter Jones (PhD, Princeton Theological Seminary) is the author of many books, including One or Two: Seeing a World of Difference, The God of Sex: How Spirituality Defines Your Sexuality, and The Gnostic Empire Strikes Back: An Old Heresy for the New Age. He is the executive director of truthXchange and an ordained minister in the Presbyterian Church in America.