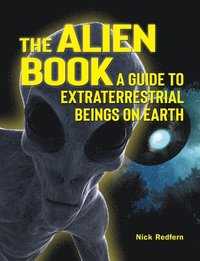 A Guide to Extraterrestrial Beings on Earth

av Nick Redfern
Häftad Engelska, 2019-09-19
249
Köp
Spara som favorit
Finns även som
Visa alla 1 format & utgåvor
These days, when we think of an alien, we conjure up an image of a black-eyed, large-headed, dwarfish being that has come to be known as a Grey. Greys have become a staple part of pop-culture, never mind just the field of UFO research. Yet, before the 1950s, these Greys didn t exist. Instead aliens came in all sizes, shapes, and bodies. This book investigates them all, along with eyewitness accounts of the people who have seen them. Covering hundreds of extraterrestrial life forms in more than 40 thematic chapters, this is an absorbing look at the mysteries of aliens on earth.
Visa hela texten

"The Alien Book is certainly comprehensive, presenting a delightful Carnival of the Aliens from Annunaki to Worm Monsters via Flying Humanoids, Black-Eyed Children and things summoned by Aleister Crowley. In its pages can be found all manner of extraterrestrials, ultraterrestrials and cryptids. ... informative and hugely entertaining." - Fortean Times "... a sweeping, breathtaking tour de force compilation of alien reports from around the world ... enjoy and refrain from reading just before going to bed!" - Alternative Perceptions Magazine "If you are a UFO enthusiast or a UFO hunter or just plain curious, this is the book for you. ... An alien resource book like no other. ... Bravo!" - The Costarican Times

Nick Redfern works full time as an author, lecturer, and journalist. He writes about a wide range of unsolved mysteries, including UFOs, alien encounters, government conspiracies, Bigfoot, and the Loch Ness Monster. His many books include Visible Ink Press' Secret History: Conspiracies from Ancient Aliens to the New World Order; Cover-Ups & Secrets: The Complete Guide to Government Conspiracies, Manipulations & Deceptions; Control: MKUltra, Chemtrails and the Conspiracy to Suppress the Masses; Secret Societies: The Complete Guide to Histories, Rites, and Rituals; The Bigfoot Book: The Encyclopedia of Sasquatch, Yeti, and Cryptid Primates; Area 51: The Revealing Truth of UFOs, Secret Aircraft, Cover-Ups & Conspiracies; and The Monster Book: Creatures, Beasts, and Fiends of Nature. He has appeared on numerous television shows, including History Channel's Monster Quest and UFO Hunters; VH1's Legend Hunters; National Geographic Channel's The Truth about UFOs and Paranatural; the BBC's Out of this World; MSNBC's Countdown; and SyFy Channel's Proof Positive. Nick lives just a few miles from Dallas, Texas' infamous Grassy Knoll.