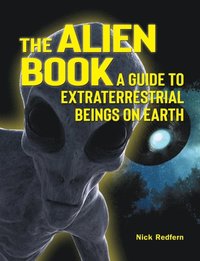 A Guide To Extraterrestrial Beings On Earth

av Nick Redfern
E-bok (EPUB - DRM), Engelska, 2019-09-01
199
Ladda ned
Spara som favorit
Laddas ned direkt
Läs i vår app för iPhone, iPad och Android
Finns även som
Visa alla 1 format & utgåvor
Unmasking the mysteries of alien life on earth!Make mention of the word &quotealien&quote and it conjures images of black-eyed, large-headed, dwarfish beings that have come to be known as the Greys. Indeed, Greys have become a staple part of pop-culture, never mind just the field of UFO research. They've appeared in Steven Spielberg's classic 1977 movie, Close Encounters of the Third Kind. They regularly popped up in The X-Files. And, of course, there are numerous people - all across the world - who claim to have been abducted by the Greys and subjected to intrusive medical experiments. Yet, before the 1950s, the Greys were nowhere in sight.The Alien Book: A Guide to Extraterrestrial Beings on Earth shows that extraterrestrial life comes in all kinds, appearances, sizes, and bodies. They all have one thing in common, however: the human race has encountered them, and we continue to do so today. Not just dozens, or even hundreds, but thousands of eyewitness experiences have been reported. Covering hundreds of extraterrestrial life forms in more than 40 thematic chapters, this absorbing look at the mysteries of aliens on earth includes the Space Brothers: long-haired, very human-looking ETs the fiendish Reptilians: seven-to-eight-foot-tall predatory shapeshifters Men in Black beings: extremely pale-skinned, tall, and with huge eyes Black-eyed Children: anemic-looking kids with solid black eyes that might be ET-human hybrids Bigfoot the werewolf-like Dogmen jellyfish-style aliens that soar around the skies of our world the Shadow People: dangerous humanoids that terrorize people legendary Nephilim space-vampires: insect-like aliens that resemble a giant praying mantis and many, many more!The Alien Book investigates the full range of sentient, alien life forms. Some are benign and others downright deadly. Some are small, like a germ or virus that has NASA, creating guidelines to deal with an outbreak of an extraterrestrial germ. Some are big like a giant praying mantis or the biblical Goliath. They all lurk on Earth and in this chilling book!With more than 120 photos and graphics, this tome is richly illustrated. Its helpful bibliography and extensive index add to its usefulness.
Visa hela texten