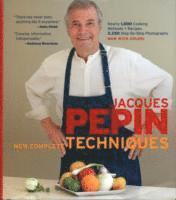 Revised Edition of the Classic Work

av Jacques Pepin
Inbunden Engelska, 2010-12-20
339
Bevaka
Spara som favorit
Bokens leverantör håller tillfälligt stängt på grund av Coronapandemin. Klicka "Bevaka" för att få ett mejl när boken går att beställa igen.
Jacques P?pin is universally hailed by professional chefs and home cooks as the grand master of cooking skills and methods. Now, his classic seminal work, Jacques P?pin?s Complete Techniques, is completely revised and updated with more than 1,000 color photographs and 30% new techniques. Based on P?pin?s 1978 and 1979 archetypal works La M?thode and La Technique,Jacques P?pin'sComplete Techniques has become a cookbook classic in its own right, selling more than 140,000 copies. Comprehensive and authoritative, New Complete Techniques includes more than 600 techniques and methods and 160 recipes that are demonstrated by P?pin in thousand of step-by-step photographs. It is a culinary course on every aspect of classic cooking, from the basics (how to sharpen a knit or peel an onion) and the practical (how to properly bone a chicken (to the whimsical (how to make decorative swans and flowers out of fruits and vegetables) and the complex (how to use an old refrigerator as a smoker for trout). The time-tested recipes show everyone, from the greenest home cook to the seasoned professional, how to put techniques into practice. This completely revised edition includes thousands of color and black-and-white photographs throughout and is redesigned to make it even easier to follow the step-by-step techniques.
Visa hela texten

"There has never been anything like it anywhere." --Julia Child "Pepin asks the reader to not treat this as a book, treat it as an apprenticeship. I took that to heart, and, indirectly, Jacques Pepin became my mentor through these techniques."--Tom Colicchio "Concise. Informative. Indispensible."--Anthony Bourdain

Jacques Pepin is one of America's best-known cookbook authors and cooking teachers, and has appeared regularly on PBS-TV for more than a decade, hosting or co-hosting with Julia Child or his daughter, Claudine, more than 300 cooking shows. A former New York Times columnist, he is a contributing editor to Food & Wine magazine and has published nineteen cookbooks. He serves as Dean of Special Programs at The French Culinary Institute in New York City and teaches at Boston University. Born in Bourg-en-Bresse, France, he was the personal chef to three French heads of state before moving to the United States in 1959. He now lives in Connecticut.