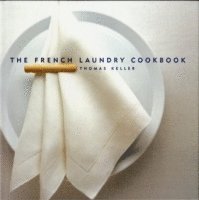 av Thomas Keller, Deborah Jones
(2 röster)
Inbunden Engelska, 1999-11-01
496
Köp
Spara som favorit
One hundred and fifty recipes are presented in this cookbook, many of them unique to the author's restaurant, such as lobster-filled crepes with a carrot-emulsion sauce, topped with a pea-shoot salad dressed lightly with lemon-infused oil, to name one of the simpler ones!
Visa hela texten

Susie Heller, executive producer of PBS's Chef Story, has produced award-winning television cooking series and co-authored numerous award-winning books, among them The French Laundry Cookbook by Thomas Keller and Bouchon by Thomas Keller and Jeffrey Cerciello. She lives in Napa, California. Thomas Keller, author of THE FRENCH LAUNDRY COOKBOOK, BOUCHON, UNDER PRESSURE, AD HOC AT HOME, and BOUCHON BAKERY, has six restaurants and five bakeries in the United States. He is the first and only American chef to have two Michelin Guide three-star-rated restaurants, the French Laundry and Per Se, both of which continue to rank among the best restaurants in America and the world. In 2011 he was designated a Chevalier of the French Legion of Honor, the first American male chef to be so honored. That same year, he launched Cup4Cup, the first gluten-free flour that replaces traditional all-purpose flour or whole wheat flour in any recipe, cup for cup, such that you'd never know the difference. As part of the ment'or BKB Foundation, established with chefs Jerome Bocuse and Daniel Boulud, Keller led Team USA to win silver at the 2015 Bocuse d'Or competition in Lyon, France, which was the first time the United States has ever placed on the podium. Deborah Jones's recent honors include Best Photography in a Cookbook from the James Beard Foundation for her work in Bouchon. A frequent contributor to national magazines, she conducts a parallel commercial career from her San Francisco studio.