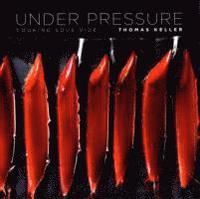 av Thomas Keller
(6 röster)  |  Läs 1 recension
Inbunden Engelska, 2008-11-17
664
Köp
Spara som favorit
Kan tyvärr inte längre levereras innan julafton.
In "Under Pressure", Thomas Keller shows us how sous vide, which involves packing food in airtight plastic bags and cooking at low heat, achieves results that other cooking methods simply cannot - in flavour and precision. For example, steak that is a perfect medium rare from top to bottom; and meltingly tender yet medium rare short ribs that haven't lost their flavour to the sauce. Fish, which has a small window of doneness, is easier to finesse, and salmon develops a voluptuous texture when cooked at a low temperature. Fruit and vegetables benefit too, retaining their bright colour while achieving remarkable textures. There is wonderment in cooking sous vide - in the ease and precision (salmon cooked at 123 degrees versus 120 degrees!) and the capacity to cook a piece of meat (or glaze carrots, or poach lobster) uniformly.
Visa hela texten

Thomas Keller is the author of The French Laundry Cookbook, Bouchon, Under Pressure, Ad Hoc at Home, and Bouchon Bakery. He is the first and only American chef to have two Michelin Guide three-star-rated restaurants, The French Laundry and per se, both of which continue to rank among the best restaurants in America and the world. In 2011 he was designated a Chevalier of the French Legion of Honor, the first American male chef to be so honored. In 2017, as part of the Ment'or BKB Foundation-established with chefs Jerome Bocuse and Daniel Boulud-Keller led Team USA to win the Bocuse d'Or competition in Lyon, France, for the first time ever.