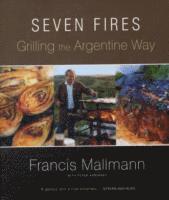 av Francis Mallmann
(1 röst)
Inbunden Engelska, 2009-04-22
259
Köp
Spara som favorit
Skickas inom 5-8 vardagar.
Fri frakt inom Sverige för privatpersoner.
The Argentines grill more meat per capita than any nation on earth. Francis Mallmann was raised in the mountains of Patagonia, trained in the great kitchens of Europe, and returned home to become the top chef in Buenos Aires and the biggest star on South American food television. In 1995 he gave up cooking fancy food and applied all the lessons of haute cuisine to maximizing flavor and texture with wood-fired cookery. His food is astoundingly bright and vivid with burnt, crusty tastes both rustic and refined. Recipes range across the menu, including non-grilled recipes for what to eat while you're building the fire. Most recipes are adapted for cooking indoors, so this is a cookbook for any season, any kitchen. Francis' seven fires are: Chapa - a cast iron griddle or skillet (the form most used in this book); Little Hell - cooking with fire above and below the food; Parilla - basically what's called barbecuing or grilling in the US; Horno de Barro - cooking in a wood-fired clay oven; Rescoldo - cooking food by burying in hot embers and ashes; Asador - cooking whole pigs or lambs affixed to an iron cross that faces a bonfire; and, Caldero - cooking in an iron cauldron or Dutch oven.
Visa hela texten

"This captivating book about cooking over wood is as straightforward as it is appealing." --New York Times "Glorious . . . You could amuse yourself all summer long exploring Mallmann's methods. His cooking is utterly unpretentious." --Fine Cooking "Mallmann cooks with the elegant purity achieved only after attaining a mastery of complicated food. I craved Mallmann's burnt flavors, from caramelized oranges with rosemary to flattened sweet potatoes charred in butter. Bobby Flay, be very afraid." --New York Times Book Review "Seven Fires is, in its essence, a love letter to Argentina's obsession with fire and food." --Epicurious "[Mallmann] reconnects us to the primal simplicity and visceral pleasure of cooking over a fire." --New York Times "Argentinean chef Francis Mallmann presents a gorgeous volume detailing seven approaches to grilling. What will keep cooks coming back, however, are rustic dishes like burnt tomatoes with fennel and mustard vinaigrette; pork chops with honey gremolata; and boneless ribeye with chimichurri. Augmented with plenty of smoky photos, the only thing readers will lack is the smell of charcoal." --Publishers Weekly starred review

Francis Mallmann is the reigning star of food television in the Spanish-speaking world, and the most famous and popular chef in South America. His restaurants include Siete Fuegos at The Vines Resort & Spa in Argentina's wine country; Patagonia Sur in Buenos Aires; El Garzon in Uruguay; and 1884 Restaurante in Mendoza, Argentina (named one of Latin America's 50 Best Restaurants). In the fall of 2015, he will open a U.S. restaurant at the Faena Hotel in Miami, Florida. USA Today and The Times (U.K.) have named his restaurants among the top 10 places to eat in the world. Most recently, Mallmann was the subject of the Netflix documentary series Chef's Table. Peter Kaminsky is the author and coauthor of many books, including Pig Perfect, Culinary Intelligence, and Seven Fires and Mallmann on Fire (with Francis Mallmann). He is a longtime contributor to Food & Wine and a former columnist for the New York Times and New York magazine. He lives in Brooklyn, New York.