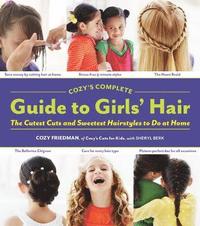 The Cutest Cuts and Sweetest Hairstyles to Do at Home

av Cozy Friedman, Sheryl Berk
Spiral bound Engelska, 2011-01-12
209
Köp
Spara som favorit
Girls love hair and every pretty thing that can be done with it-and parents spend hours maintaining and styling it for them. SO PRETTY gives insider's info to make this job faster and easier for both parent and daughter. Starting with Hair ID profiles, the book recommends the products, methods, and tools best for each hair type, from curly to straight. Expert tips include the best cut for a girl's hair type and face, instant fixes for bad hair days, no-cry haircuts for babies, and how to make hair perfect for pictures. Girls themselves will love the fresh photographs of each style-from five-minute dos for rushed school mornings to extra-special looks for weddings and holidays.
Visa hela texten

Sheryl Berk has been a contributing writer to Martha Stewart Weddings, InStyle, and New York Daily News. Books she has collaborated on include Britney Spears' Heart to Heart and Colin Cowie's Legendary Weddings. Inspired by a friend's tale of a little nephew's tearful visit to a grown-up hair salon, Cozy Friedman had the idea of creating a salon where kids are the priority, not a nuisance. After earning her barber's license, she opened the doors to her first salon on Madison Avenue in New York City, Cozy's Cuts for Kids. Fifteen years later, Cozy--now a mother of two--provides stress-free cuts and styles for New York kids, including the children of many celebrities, in her three salons. Her hair product line, So Cozy Hair Care for Children, is distributed nationwide.