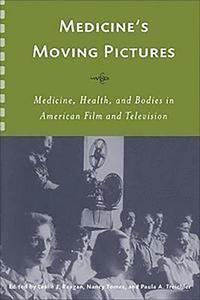 This collection will be indispensable to scholars. --FILM & HISTORY, [Jennifer Tebbe-Grossman] While these essays are focused as stand-alone pieces that individually make a significant contribution to our understanding of representational work in selected media forms, they also point to the need for a more comprehensive view of what still remains essentially uncharted territory in the available histories. --TECHNOLOGY AND CULTURE [Julie K. Brown] [A] collection of engaging, original essays . . . [T]hey correct a common but misleading dismissal of medicine's cinematic and televisual depictions as frivolous and inconsequential in comparison with the serious and socially important practice of medicine. --AMERICAN HISTORICAL REVIEW [Kirsten Ostherr] Medicine's Moving Pictures is a welcome contribution in exploring how visual culture has shaped and responded to the changing practice, politics, and promotion of medicine in America. . . [This book] offers a glimpse into the rich and creative scholarship that awaits American historians who venture into the relatively untapped collections of health-related films and television shows produced over a century of America's changing visual and medical culture. --THE JOURNAL OF AMERICAN HISTORY [Gregg A. Mitman] Of particular interest is the well-documented corporate and political give-and-take regarding how a sensitive medical subject will be treated. CHOICE [R.D. Arcari] A consistently illuminating and engaging exploration of medicine's representation in film and television. In the language of Variety, it combines art and box office: a substantive and accessible contribution to cultural and media studies as well as to the history of medicine. --Charles Rosenberg, Professor of the History of Science and Ernest E. Monrad Professor in the Social Sciences, Harvard University Film and television representation of health and medicine is neglected, both as an area of historical study and as a research resource. This collection, ranging as it does from wartime public heath films about syphilis to post-war TV doctors, is therefore to be welcomed. Its interdisciplinary approach helps us begin to decode important areas of twentieth-century American cultural history. --Virginia Berridge, Professor of History, London School of Hygiene and Tropical Medicine