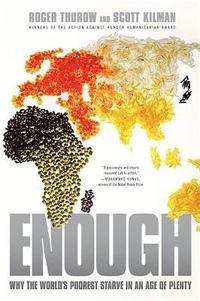 Why the World's Poorest Starve in an Age of Plenty

"How, in a world of plenty, can people be left to starve? We think, 'It's just the way of the world.' But if it is the way of the world, we must overthrow the way of the world. Enough is enough." Bono "In the twenty-first century, the world has no excuse for tolerating the existence of a billion people going without food. Enough is a passionate and clearly-reasoned call for action to finally end forever the age-old scourge of hunger for any human being." Muhammad Yunus, winner of the Nobel Peace Price and author of Creating a World Without Poverty 'Food is our biggest and most complex industry, and faced with such an elephant, different authors understandably focus on different bits. For a general wrap-up of how we got into this mess and what we need to do about it, you can't do better than Enough by Roger Thurow and Scott Kilman. This very readable book argues that the agricultural science and technology of the green revolution, which ended famine in much of the world last century, was on the whole a good thing, and that we need more of it.' New Scientist 'While grounded in colourful, entertaining reportage, Enough also displays a depth of thought and research more commonly found in academic studies. Well-chosen anecdotes bring the issues to life.' The Financial Times"

Roger Thurow has been a Wall Street Journal foreign correspondent for twenty years. Scott Kilman has been the Journal&lsquos leading agriculture reporter. Thurow and Kilman recently won the Action Against Hunger Humanitarian Award.