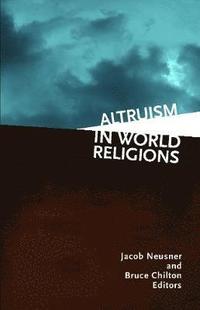 av Jacob Neusner, Bruce D Chilton
Häftad Engelska, 2005-11-01
299
Bevaka
Spara som favorit
Tillfälligt slut – klicka "Bevaka" för att få ett mejl så fort boken går att köpa igen.
In 1830 philosopher Auguste Comte coined the term altruism to provide a general definition for the act of selflessly caring for others. But does this modern conception of sacrificing one's own interests for the well-being of others apply to the charitable behaviors encouraged by all world religions? In Altruism in World Religions prominent scholars from an array of religious perspectives probe the definition of altruism to determine whether it is a category that serves to advance the study of religion. Exploring a range of philosophical and religious thought from Greco Roman philia to Judaism, Christianity, and Islam, from Hinduism in India to Buddhism and the religions of China and Japan, the authors find that altruism becomes problematic when applied to religious studies because it is, in fact, a concept absent from religion. Chapters on Judaism, Christianity, and Islam reveal that followers of these religions cannot genuinely perform self-sacrificing acts because God has promised to reward every good deed. Moreover, the separation between the self and the other that self-sacrifice necessarily implies runs counter to Buddhist thought, which makes no such distinction. By challenging our assumptions about the act of self-sacrifice as it relates to religious teachings, the authors have shown altruism to be more of a secular than religious notion. At the same time, their findings highlight how charitable acts operate with the values and structures of the religions studied.
Visa hela texten

"A fascinating assessment of the 'place' of altruism in religion. Generally perceived as a religious value, it is surprising to learn that altruism is generally defined in the West as either irrelevant or in tension with the fundamental concerns of most of the world's major religious traditions. It is not that the world religions neglect duty to others, benevolence, charity, and the like, but rather that our contemporary understanding of altruism is not capable of accounting for these values in their local contexts." - Don Wiebe, professor in the Faculty of Divinity at Trinlty College, University of Toronto and cofounder of the North American Association for the Study of Religion "These careful textual studies disclose the reward structure ingredient in the world's great religious traditions. Their impact is theologically provocative, to say the least. Stunning!" - Barbara Deconcini, executive director, American Academy of Religion"