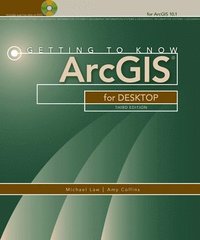 Getting to Know ArcGIS for Desktop

Getting to Know ArcGIS (R) for Desktop is a workbook that introduces the principles of GIS via hands-on exercises. Readers are shown how to use ArcGIS for Desktop software tools to display and present maps and data, and then query and analyse the data. The third edition has been reorganised and includes new topics such as exploring online resources and raster data and contains new exercises, data, and learning tools. Known for its broad scope, clarity, and reliability, Getting to Know ArcGIS for Desktop is equally well-suited for classroom use, independent study, and as a reference. A data DVD for working through the exercises is included with the book, and access to a 180-day trial of ArcGIS 10.1 for Desktop is provided.
Visa hela texten