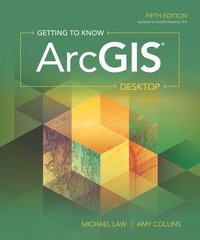 Getting to Know ArcGIS Desktop

av Michael Law, Amy Collins
Häftad Engelska, 2018-04-12
798
Köp
Spara som favorit
Skickas inom 5-8 vardagar.
Fri frakt inom Sverige för privatpersoner.
Finns även som
Visa alla 1 format & utgåvor
Becoming the go-to person for ArcGIS Desktop? Start here. Getting to Know ArcGIS Desktop, fifth edition, is a comprehensive introduction to the features and tools of ArcGIS Desktop. Through hands-on exercises, readers will discover, use, make, and share maps with meaningful content. They will also learn how to build geodatabases, query data, analyze geospatial data, and more. The latest edition has been updated to the most current version of ArcGIS Desktop 10.6. Getting to Know ArcGIS Desktop is suited for classroom use, independent study, and as a reference. Data for completing the exercises and a 180-day free trial of ArcGIS Desktop are available for download. An e-book of Getting to Know ArcGIS Desktop, fifth edition, ISBN 9781589485112, $99.99, is available at most e-book retailers. Note: Esri Press e-books do not include 180-day trial software. Instead, you can download the ArcGIS Trial at http://www.esri.com/arcgis/trial.
Visa hela texten