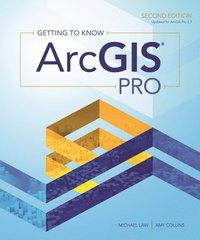 Getting to Know ArcGIS Pro

Michael Law has worked professionally with GIS since 2004 when he began at Rand McNally Canada and later worked as a cartographer for Esri Press, where he developed cartography for books, and edited and tested GIS workbooks. Now based in Toronto, Canada, Law continues to work with GIS software, writing technical documentation, teaching training courses, and designing and optimizing user interfaces. Amy Collins was first introduced to GIS in 2002 when she began working as a technical editor at Esri. There, she honed her GIS skills and cultivated an interest in designing effective instructional materials. Now a writer and editor based in Northern California, she continues to develop GIS materials, among other projects. Law and Collins are the authors of two editions of Getting to Know ArcGIS for Desktop.