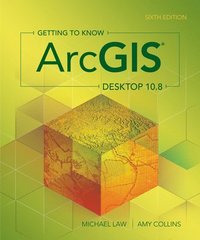 Getting to Know ArcGIS Desktop 10.8

av Michael Law, Amy Collins
Häftad Engelska, 2022-07-05
1019
Köp
Spara som favorit
Finns även som
Visa alla 1 format & utgåvor
Want to get up and running with ArcGIS (R) Desktop? Start here. Getting to Know ArcGIS Desktop 10.8, sixth edition, is the classic textbook that introduces readers to the features and tools of ArcGIS Desktop, specifically ArcMapTM, the popular professional geographic information system (GIS) application from Esri. Rooted in the science of geography, GIS is a framework for gathering, managing, and analyzing data using map visualizations and location intelligence. GIS and ArcGIS have become essential to thousands of businesses and organizations. Through hands-on exercises, readers get a comprehensive introduction to the features and tools of ArcMap. Discover, use, make, and share maps with meaningful content. Learn how to build geodatabases, query data, analyze geospatial data, and more. Now in its sixth iteration, this edition of Getting to Know ArcGIS Desktop 10.8 has been updated to teach and function with the most current version of the software, ArcGIS Desktop 10.8.x. Data for completing the exercises and a 180-day free trial of ArcGIS Desktop are available for download. Explore why Getting to Know ArcGIS Desktop 10.8 is a top-selling choice for classroom use, independent study, and as a reference for students and professionals alike.
Visa hela texten