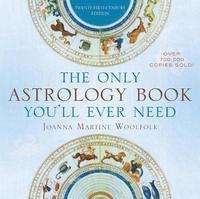 The Only Astrology Book You'll Ever Need

Now with an Interactive PC- and Mac-Compatible CD

av Joanna Martine Woolfolk
(1 röst)
Häftad Engelska, 2013-01-13
204
Bevaka
Spara som favorit
Tillfälligt slut – klicka "Bevaka" för att få ett mejl så fort boken går att köpa igen.
This new edition of The Only Astrology Book You'll Ever Need is packed with updated information on Sun signs, Moon signs, Ascending signs, the placement of Planets in your Houses, and the latest astronomical discoveries. This book provides the compatibility between every sign (144 combinations) and dispenses advice about health, money, lifestyle, and romance, while also offering advice on dealing with the negative aspects of each sign. This edition also takes an even closer look at the inner life of the individual and the emotional needs that motivate a person. Chapters include a look back on the history and mythology of astrology as well as the newest developments in astronomy. This is an indispensable source book for unlocking the mysteries of the cosmos through the twenty-first century and beyond.
Visa hela texten

Truly lives up to its title. * United Press International * A great bargain for the price, this is highly recommended for all astrology collections. * Library Journal * Ms. Woolfolk's popular book is an easy-to-follow introduction... * Dell Horoscope Magazine * The Only Astrology Book You'll Ever Need is an updated and revised edition of the 1982 text, now including more depth in the meaning of the signs, relationships...It is a fairly comprehensive text. It covers all of the basics of modern astrology that you'd be looking for: sun signs, decanates, moon signs, ascendants, the planets, the houses, and how to read a chart. All of these sections are well written and informative... * Spiral Nature *

Joanna Martine Woolfolk has had a long career as an author, columnist, lecturer, and counselor. She has written the monthly horoscope for numerous magazines in the United States, Europe, and Latin America-among them Marie Claire, Harper's Bazaar, Redbook, Self, YM, House Beautiful, and StarScroll International. In addition to the best-selling The Only Astrology Book You'll Ever Need, Joanna is the author of Sexual Astrology, which has sold over a million copies worldwide. She is a popular television personality who has been interviewed by Barbara Walters and Sally Jessy Raphael, and had a regular astrology segment on NBC's The Morning Show, Live with Regis & Kelly on ABC, The Fairfield Exchange on CT Channel 12, and on QVC. You can visit her website at www.joannamartinewoolfolk.com.