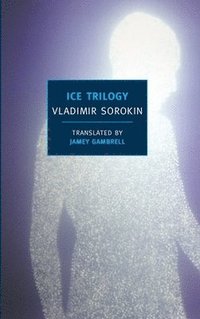 av Vladimir Sorokin
(2 röster)
Häftad Engelska, 2011-03-15
234
Köp
Spara som favorit
Finns även som
Visa alla 1 format & utgåvor
Ice-which recounted the escapades of a group of blond, blueeyed homicidal fanatics, the so-called Brotherhood of Light, who consider themselves the chosen people and the rest of humanity so many expendable "meat machines"-was a gritty, blistering tale of contemporary Moscow at its most unhinged and violent. Written from the point of view of the sect, Ice now appears as the central panel of Vladimir Sorokin's enormously ambitious and riveting Ice Trilogy. Bro, the first section of Sorokin's chef d'oeuvre, relates the mysterious emergence of the brotherhood in the aftermath of a massive meteorite striking Siberia (a historical occurrence known as the Tungus event). The story of the group's development then unfolds at the leisurely pace and with the vivid detail of a great nineteenth-century Russian novel. 23,000 brings the trilogy to a wildly suspenseful close. All 23,000 members of the brotherhood have at last been brought together and they are preparing to stage the global destruction that will return them to their origins in pure light. Will their vision of innocence redeemed at last succeed? A modern myth and a myth of the modern, Ice Trilogy is a virtuosic performance by one of Russia's boldest writers. Sorokin demonstrates the raw power of fiction to make and unmake worlds, not to mention the threatening unrealities that underlieu our grasp on reality. Could it be, we come to wonder, that the Brotherhood of Light is, finally, nothing less than the image of humanity, of us?
Visa hela texten

Thanks to a translation by Jamey Gambrell that heroically endeavours to capture its myriad voices, from watercolour lyricism to purest pulp, we can enjoy it in all its gaudy glory. Think William S Burroughs, and Mickel Houellebecq, and Will Self, all whizzed into this delirious post-Soviet SF mash-up. I found some sections absoutely exquisite, some unexpectedly moving, some intellectually exhilarating - and plenty just grotesque and absurd, as Sorokin no doubt planned. -- Boyd Tonkin Independent

Vladimir Sorokin was born in a small town outside of Moscow in 1955. He trained as an engineer at the Moscow Institute of Oil and Gas, but turned to art and writing, becoming a major presence in the Moscow underground of the 1980s. His work was banned in the Soviet Union, and his first novel, The Queue, was published by the famed emigre dissident Andrei Sinyavksy in France in 1983. In 1992, Sorokin's Collected Stories was nominated for the Russian Booker Prize; in 1999, the publication of the controversial novel Blue Lard, which included a sex scene between clones of Stalin and Khrushchev, led to public demonstrations against the book and to demands that Sorokin be prosecuted as a pornographer; in 2001, he received the Andrei Biely Award for outstanding contributions to Russian literature. Sorokin is also the author of the screenplays for the movies Moscow, The Kopeck, and 4, and of the libretto for Leonid Desyatnikov's The Children of Rosental, the first new opera to be commissioned by the Bolshoi Theater since the 1970s. He has written eleven novels, as well as numerous plays and short stories, and his work has been translated throughout the world. He lives in Moscow. Jamey Gambrell is a writer on Russian art and culture. Her translations include Marina Tsvetaeva's Earthly Signs: Moscow Diaries, 1917-1922, a volume of Aleksandr Rodchenko's writings, Experiments for the Future, and many of the stories included in Tatyana Tolstaya's White Walls. Her translation of Vladimir Sorokin's Ice has recently been published by NYRB Classics.