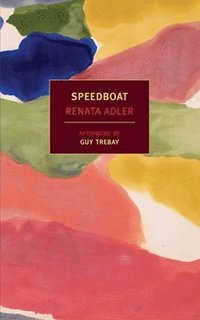 av Renata Adler
Häftad Engelska, 2013-03-19
201
Köp
Spara som favorit
Finns även som
Visa alla 3 format & utgåvor
It has been more than thirty-five years since Renata Adler's Speedboat charged through the literary establishment, blasting genre walls and pointing the way for a newly liberated way of writing. This unclassifiable work is simultaneously novel, memoir, commonplace book, confession, and critique. It is the story of every man and woman cursed with too much consciousness and too little comprehension, and it is the story of Jen Fein, a journalist negotiating the fraught landscape of contemporary urban America. Her voice is cuttingly perceptive, darkly funny, and always fiercely intelligent as she breaks narrative convention to send dispatches back from the world as she finds it.
Visa hela texten

'She is one of the most brilliant-that is, vivid, intense, astute, and penetrating-essayists in contemporary letters, and most contrarian: much of what you think she will passionately undo. And she is a novelist whose voice, even decades after her books were written, seems new and original, and, if you are a writer, one you wish were your own.' Michael Wolff, The Guardian 'After years of being passed along to new readers like samizdat pamphlet. ... these are not works of realism--they have a dreamlike quality-- but they contain as much reality as a Balzac novel does... "Speedboat" is one of the more penetrating and oddly hypnotizing books I know; reading it is like being in a snowstorm. ...If all you get from "Speedboat" and "Pitch Dark" is a shudder of pleasure and self-recognition, you are probably not reading deeply enough. Welcome Back, Renata Adler' Meghan O'Rourke, The New Yorker Speedboat is dazzling ...line for line and sentence for sentence, it seems to me thrilling. ... observant, funny, urbane. ... What is it is a war novel. ... after all - a narrative like any other. It will or it won't "come out." The way it eventually does, in a chaos of spies and hostages, is satisfying, even if it isnt optimistic. ... Matthew Spektor, The Believer 'I think Speedboat will find a new generation of dazzled readers.' Katie Roiphe, Slate Speedboat is as vital a document of the last half of the American century as Slouching Towards Bethlehem and The Death and Life of Great American Cities. Right down to its final, just-right sentence, it's-well, it will literally knock your socks off. Michael Robbins, Chicago Tribune Speedboat captivates by its jagged and frenetic changes of pitch and tone and voice. Adler confides, reflects, tells a story, aphorizes, undercuts the aphorism, then undercuts that. Ideas, experiences, and emotions are inseparable. I don't know what she'll say next. She tantalizes by being simultaneously daring and elusive. David Shields, Reality Hunger A brilliant series of glimpses into the special oddities and new terrors of contemporary life-abrupt, painful, and altogether splendid. Donald Barthelme 'Adler shines in this weird, hilarious and completely enchanting novel ... pitch-perfect, pin-sharp prose ... it feels more cutting edge than most contemporary novels' Dazed & Confused "fragmentary and frequently hilarious novel about what it was to be an urban American in the 1970s" Irish Times Ms. Adler's writing has turned out to be prescient and quietly influential, and her debut novel cast a long shadow on what I consider to be the strongest works of fiction published this year. Speedboat does not prescribe to any novelistic convention-namely, plot (linear or not, it does not have one to speak of)-and yet it distills the novel to its most basic necessities. It is a series of disjointed paragraphs, each a kind of novel in itself, in which every sentence has the urgency of a mortal wound. Michael Miller, The New York Observer ...Renata Adler's ahead-of-its-time novel Speedboat has gone from cult favorite to undisputed classic. The Fiction Advocate This novel is a semi-plotless investigation of contemporary life, both actual and intellectual, in which every sentence gleams and winks and lifts boulders. It is vital and dazzling and will never, never go out of style. Flavorwire Written before the ubiquity of writing workshops and the polished sameness that hovers over most of the polite novels published these days, these two books are triumphs now. They are evidence of what happens when messy life meets clean white page in exquisite prose and should be lingered over, not digested in gulps just to get to THE END. A.V. Club

RENATA ADLERwas born in Milan and raised in Connecticut. She received a B.A. from Bryn Mawr, an M.A. from Harvard, a D.d'E.S from the Sorbonne, a J.D. from Yale Law School, and an LL.D. (honorary) from Georgetown. Adler became a staff writer at The New Yorker in 1963 and, except for a year as the chief film critic of The New York Times, remained at The New Yorker for the next four decades. Her books include A Year in the Dark (1969); Toward a Radical Middle (1970); Reckless Disregard: Westmoreland v. CBS et al., Sharon v. Time (1986); Canaries in the Mineshaft (2001); Gone: The Last Days of The New Yorker (1999); Irreparable Harm: The U.S. Supreme Court and The Decision That Made George W. Bush President (2004); and the novels Speedboat (1976; winner of the Ernest Hemingway Award for Best First Novel) and Pitch Dark (1983). GUY TREBAY writes on fashion and style for The New York Times. He was previously a columnist and senior editor at The Village Voice, and has written for The New Yorker, Vibe, Conde Nast Traveler, Harper's, Esquire, Vogue and other major publications. His books include In The Place To Be: Guy Trebay's New York and Runway, with photography by Larry Fink