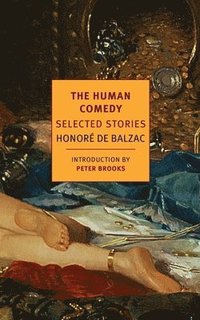 av Honore De Balzac
Häftad Engelska, 2014-01-21
181
Köp
Spara som favorit
Finns även som
Visa alla 1 format & utgåvor
Characters from every corner of society and all walks of life-lords and ladies, businessmen and military men, poor clerks, unforgiving moneylenders, aspiring politicians, artists, actresses, swindlers, misers, parasites, sexual adventurers, crackpots, and more-move through the pages of The Human Comedy, Balzac's multivolume magnum opus, an interlinked chronicle of modernity in all its splendor and squalor. The Human Comedy includes the great roomy novels that have exercised such a sway over Balzac's many literary inheritors, from Dostoyevsky and Henry James to Marcel Proust; it also contains an array of short fictions in which Balzac is at his most concentrated and forceful. Nine of these, all newly translated, appear in this volume, and together they provide an unequaled overview of a great writer's obsessions and art. Here are "The Duchesse de Langeais," "A Passion in the Desert," and "Sarrasine"; tales of madness, illicit passion, ill-gotten gains, and crime. What unifies them, Peter Brooks points out in his introduction, is an incomparable storyteller's fascination with the power of storytelling, while throughout we also detect what Proust so admired: the "mysterious circulation of blood and desire."
Visa hela texten

"I have learned more [from Balzac] than from all the professional historians, economists, and statisticians put together." -- -Friedrich Engels "In Balzac, every living soul is a weapon loaded to the very muzzle with will." -- -Charles Baudelaire "Large as Balzac is, he is all of one piece and he hangs together perfectly." -- -Henry James "Balzac was both a greedy child and an indefatigable observer of a greedy age, at once a fantastic and a genius, yet possessing a simple core of common sense." -- -V. S. Pritchett "Balzac was by turns a saint, a criminal, an honest judge, a corrupt judge, a minister, a fob, a harlot, a duchess, and always a genius." -- -Andre Maurois "the great thing about work this entertainis that it's still exciting nearly 200 years on; so it isn't just a bridge, it's a fully functioning time machine. I strongly recommend you hop in." The Guardian These tales provide the reader a healthy introduction to Balzac's famous hyperbole, his melodrama, and his extended descriptions and explanations where nothing goes unsaid. We don't read Balzac for his refined style; rather, his genius lies in the sheer ambition of his reach, the vastness of his grasp." Publishers Weekly The characters and sentences still leap from the page as if they were trapped there just seconds ago. It's just choosing where to begin...Happily, in The Human Comedy: Selected Stories, Peter Brooks has managed to capture this enormous range and more by plucking a mere nine of the Frenchmen's best tales. There is a good range on display here, as broad as the Napoleonic Empire. Dandies and duchesses discuss the decline of aristocratic mores at a dinner party in "Another Study of Womankind." In "A Passion in the Desert," a soldier lost in the Sahara stumbles upon an oasis, which he discovers is inhabited by a panther. Out of such tales one can see how Balzac was the great-grandfather to writers as diverse as Colette and Antoine de Saint-Exupery. The Boston Globe

HONORE DE BALZAC (1799-1850) is one of the greatest and most influential of novelists, was born in Tours and educated at the College de Vendome and the Sorbonne. He began his career as a pseudonymous writer of sensational potboilers before achieving success with a historical novel, The Chouans. Balzac then conceived his great work, La Comedie humaine, an ongoing series of novels in which he set out to offer a complete picture of contemporary society and manners. Always working under an extraordinary burden of debt, Balzac wrote some eighty-five novels in the course of his last twenty years, including such masterpieces as Pere Goriot, Eugenie Grandet, Lost Illusions, and Cousin Bette. In 1850, he married Eveline Hanska, a rich Polish woman with whom he had long conducted an intimate correspondence. Three months later he died. In addition to the present collection, NYRB Classics publishes a translation of Balzac's The Unknown Masterpiece and Gambara. PETER BROOKS taught for many years at Yale, where he was Sterling Professor of Comparative Literature. He has written about Balzac in a number of books, including The Melodramatic Imagination, Reading for the Plot, Henry James Goes to Paris, and Enigmas of Identity. He is currently Andrew W. Mellon Scholar at Princeton and is at work on Flaubert in the Ruins of Paris. LINDA ASHER has translated works by Milan Kundera, Georges Simenon, Victor Hugo, Jean-Pierre Vernant, Restif de la Bretonne, and many others. A former fiction editor at The New Yorker, she has and ASCAP Deems Taylor translation prizes and is a Chevalier of the Order of Arts and Letters of the French Republic. CAROL COSMAN is a translator of French literature and letters. Her work includes Exile and the Kingdom by Albert Camus, Colonel Chabert by Honore de Balzac, America Day by Day by Simone de Beauvoir, The Elementary Forms of Religious Life by Emile Durkheim, and The Family Idiot (a study of Flaubert) by Jean-Paul Sartre. JORDAN STUMP is a professor of French at the University of Nebraska-Lincoln; the author, most recently, of The Other Book: Bewilderments of Fiction; and the translator of some twenty works of (mostly) contemporary French prose by authors such as Marie NDiaye, Eric Chevillard, Antoine Volodine, and Jean-Philippe Toussaint. His translation of Claude Simon's The Jardin des Plantes won the French-American Foundation's annual translation prize in 2001.