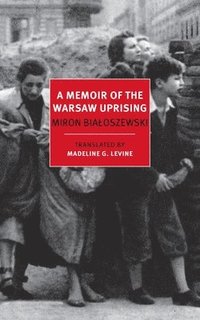 A Memoir Of The Warsaw Uprising

av Madeline Levine, Miron Bialoszewski
Häftad Engelska, 2015-10-27
179
Köp
Spara som favorit
A Memoir of the Warsaw Uprising is both a work of memory and a work about memory. Miron Bialoszewski, the great avant-garde Polish poet, memorializes the doomed uprising of the Polish population against their Nazi masters, which began on August 1, 1944, and was eventually abandoned on October 2, 1944, with the physical destruction of Warsaw, street by street and house by house, and the slaughter of 200,000 civilians. Yet Bialoszewski begins his memoir not with an invocation of the great historical events about to unfold but with a simple observation: "Tuesday, August 1, 1944, was cloudy, humid, not too warm...and I remember that there were many trolleys, cars, and people and that right after I reached the corner of Zelazna Street, I realized what day it was (the first of August) and I thought to myself, more or less in these words: 'August 1 is Sunflower Day.' " Bialoszewski concentrates on recalling the things he saw, felt, smelled, and heard. Each object is precious. Each possesses its own integrity, which the violence of the Nazis will destroy. In reclaiming these objects, Bialoszewski combats the inner evil of the time he recounts, the thinking of those for whom the individual is meaningless and the moment is a fraud. In dwelling with loving concern on the cobblestones, glass jars, and the casual words people spoke in passing, Bialoszewski sets himself against those for whom history justifies all actions and violence is a substitute for truth. Bialoszewski rescues memory from history. He rescues the moment from the epic sweep of the thousand-year Reich. He observes "the glaring identity of 'now.' " He tells us: "That is why I am writing about this. Because it is all intermeshed. Everything. My neighborhood too. Leszno, Chlodna, and Muranow. Because the majority of my churches were there. Then the Jews. And Kochanowski. And that woman near the pillars." In reclaiming the memory of the anonymous "woman near the pillars," Bialoszewski reaffirms the life-giving power of the imagination, which all the force of the inhuman Nazi machine could not-and cannot-obliterate.
Visa hela texten

"A master of grammatical games, puns, and colloquial speech patterns, this dark-minded, philosophically inclined scrutinizer of the humblest objects of daily life is enjoying more popularity and critical attention a quarter century after his death than during his lifetime. Outside of Poland, he remains best known for his "Memoir of the Warsaw Uprising."" --"The Iowa Review"" " "Białoszewski very quickly emerged, surfaced for me as the most exciting and most intriguing Polish writer of what now would be the second half of the century." --"Chicago Review"" " "Białoszewski demonstrates that each loss also offers a new way of seeing and something new to see, even if what comes into view is only a 'grey naked hole.' He manages to generate a new form from absence and emptiness as the 'greynakedhole' takes on a life of its own. Seen this way, the world's inescapable losses generate not only pain, but also creative possibility and even perhaps 'inexhaustible joy.' " --Clare Cavanaugh, "Partisan Review"" " "This most 'private' author of postwar Polish literature disregards discourses of history so deeply embedded in the Polish literary tradition; rather he focuses on the mundane aspects of the everyday life, usually from an autobiographical perspective and using an overtly colloquial language. Although Białoszewski's works have stirred many discussions, most of these have focused on his treatment of genres and language." --Joanna Nizynska, professor of Polish, Harvard University "Poems of Miron Białoszewski is the book I hope to one day hold in my hands. A great post-war Polish poet, Białoszewski wrote work radically different from that of his contemporaries--Miłosz, Świr, Kamieńska, Herbert, and Szymborska--but his poetry was just as powerful and important to the development of the contemporary European lyric.... When I mentioned [him] to Tomaž Salamun in a recent conversation, Tomaž's face lit up: 'Białoszewski, when he is translated and available in English, will cause an explosion in American poetry!' One hopes so." --Ilya Kaminsky, poetry editor, "Words Without Borders"

MIRON BIALOSZEWSKI (1922-1983) was one of Poland's greatest postwar poets, a playwright, and an actor. Deported to a German work camp following the Warsaw Uprising, he escaped a month later and eventually returned to the devastated city after the war. His first volume of poetry, Obroty rzeczy (Revolution of Things), appeared in 1956 in Warsaw and created a sensation. This was followed by several other collections of poetry, A Memoir of the Warsaw Uprising and other narrative prose, and travelogues. Idiosyncratic and notoriously difficult to translate, he became a minor cult figure in the United States with the appearance of The Revolution of Things: Selected Poems of Miron Bialoszewski (1974). MADELINE LEVINE is a professor of Slavic languages and literatures at the University of North Carolina, Chapel Hill.