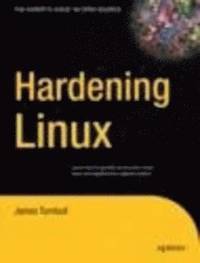 av James Turnbull
Häftad Engelska, 2005-02-01
609
Köp
Spara som favorit
Finns även som
Visa alla 1 format & utgåvor
Hardening is the process of protecting a system and its applications against unknown threats. Hardening Linux identifies many of the risks of running Linux hosts and applications and provides practical examples and methods to minimize those risks. The book is written for Linux/UNIX administrators who do not necessarily have in-depth knowledge of security but need to know how to secure their networks.
Visa hela texten

James Turnbull is the author of five technical books about open source software and a longtime member of the open source community. James authored the first and second books about Puppet, and works for Puppet Labs, running client services. James speaks regularly at conferences including OSCON, Linux.conf.au, FOSDEM, OpenSourceBridge, DevOpsDays and a number of others. He is a past president of Linux Australia, has run Linux.conf.au and serves on the program committee of Linux.conf.au and OSCON. James is Australian but currently lives in Portland, Oregon. His interests include cooking, wine, political theory, photojournalism, philosophy, and most recently the Portland Timbers association football team.