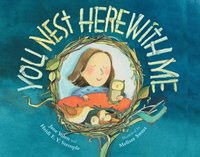 You Nest Here With Me

av Jane Yolen, Heidi Stemple
Inbunden Engelska, 2015-03-03
209
Köp
Spara som favorit
Skickas inom 3-6 vardagar.
Fri frakt inom Sverige för privatpersoner.
Finns även som
Visa alla 1 format & utgåvor
With rhyming text, this soothing bedtime book is an ode to baby birds everywhere and sleepy children home safe in their own beds. As a mother describes to her child how many species of birds nest, from pigeons on concrete ledges to owls in oak tree boles to swallows above barn doors. The soothing refrain of "you nest here with me" eases her little one and readers alike to slumber. Combining their poetic writing and their love of birding, mother and daughter Jane Yolen and Heidi Stemple have written what is sure to become a bedtime classic.
Visa hela texten

* "Do we need another good night book? The answer is unequivocally yes... This delights the eye, mind and heart." --Booklist, starred review "... a gentle rhyming bedtime story that spotlights 14 birds' nesting habits and habitats. A well-crafted and informative window onto the world of winged creatures." --Publishers Weekly "As she puts her daughter to bed, a mother shares a soothing rhyme about birds that nest in places far and near... A worthwhile purchase for collections that need new selections for bedtime sharing."--School Library Journal "With an easy cadence and a comforting anchor, Yolen and Stemple drift from cowbird to killdeer, bedding down winged creatures while always returning to the safety of mom and home... The text and the images work well together, balancing the mood of quiet comfort with avian description... As a whole, the book ably carries readers past many flying friends and lands with ease in a safe nest." --Kirkus Reviews

Bloggat om You Nest Here With Me

Jane Yolen has received numerous awards for her writing, including the Golden Kite Award, two Christopher Medals, and both the Kerlan Award from the University of Minnesota and the Regina Medal for her body of work. She lives in Hatfield, Massachusetts, and St. Andrews, Scotland. janeyolen.com. Heidi Stemple has published almost 20 books and numerous short stories and poems, mostly for children. She lives on an old farm in western Massachusetts. Melissa Sweet has illustrated nearly 100 books for children. She wrote and illustrated Balloons Over Broadway which garnered many awards including the 2012 Sibert Medal. She also illustrated A River of Words: The Story of William Carlos Williams by Jen Bryant, a 2008 Caldecott Honor book. She lives in Rockport, ME.