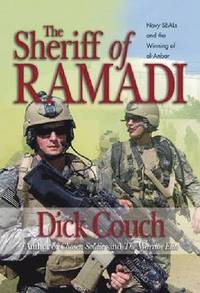 The Sheriff of Ramadi

Navy Seals and the Winning of Al-Anbar

av Captain Dick Couch
Häftad Engelska, 2010-09-15
249
Köp
Spara som favorit
Skickas inom 5-8 vardagar.
Fri frakt inom Sverige för privatpersoner.
In this ground-breaking book, bestselling author and former U.S. Navy SEAL Dick Couch reports on the actions of the SEAL Task Unit during the Battle of Ramadi in Iraq's al-Anbar Province between 2005 and 2007. When he began his research, the author thought he would be writing about the SEALs' courage in the face of a losing cause. Instead, he discovered a startling success story whose importance has gone unrecognised in the war against al-Qaeda. Couch argues that the lessons of Ramadi, with SEALs fighting alongside regular forces in an urban war zone, call for using this strategy more widely. One of the most significant military engagements in the global war against terrorism since 9/11 and the most sustained and vicious engagement ever fought by SEALs, the Battle of Ramadi demonstrates both their code of brotherhood and ability to adapt in an urban battle space, which Couch identifies as the keys to the SEALs'success on the battlefield. The story of PO2 Michael Monsoor, who was posthumously awarded the Medal of Honor for his bravery during the battle, is a compelling example of their extraordinary brotherhood. First published in hardcover in 2008, the book is now available in paperback for the first time. About the Author Dick Couch, a 1967 graduate of the Naval Academy, served with the Navy Underwater Demolition and SEAL Teams. While a platoon leader with SEAL Team One, he led one of the only successful POW rescue operations of the Vietnam War. Later, he served as a Maritime Operations Officer with the Central Intelligence Agency. A resident of Ketchum, ID, he is the award-winning author of dozens of books, including Chosen Soldier and A Tactical Ethic, and a regular TV and radio news analyst.
Visa hela texten

Bloggat om The Sheriff of Ramadi

Dick Couch was born in Mississippi and raised in Southern Indiana. He is a 1967 graduate of the U.S. Naval Academy and served with the Navy Underwater Demolition and SEAL Teams. While a platoon leader with SEAL Team One in 1970, he led one of the only successful POW rescue operations of the Vietnam War. On release from active duty in 1972, he joined the Central Intelligence Agency where he served as a Maritime Operations Officer. He retired from the Naval Reserve in 1997 with the rank of captain. Dick has been a guest on "The O'Reilly Factor with Bill O'Reilly," on "Hardball" with Chris Matthews, and on the MS/NBC nightly news with Brian Williams. He is frequently heard on National Public Radio and numerous other radio talk shows, including the Jim Bohannon Show and the G. Gordon Liddy Show. He served as an analyst for Fox TV, MS/NBC TV, and ABC radio during combat operations in Iraq. Dick lectures at the Naval Academy, the Air Force Academy, the Naval Special Warfare Center, the JFK Special Forces Center and School, the FBI Academy, the Naval Postgraduate School, The Joint Special Operations University and The Academy Leadership Forum on issues of character development, the Warrior Ethic, and counterinsurgency. He is a sought-after corporate and motivational speaker.