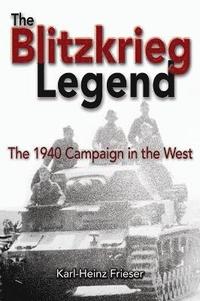 av Karl-Heinz Frieser
(1 röst)
Häftad Engelska, 2013-01-30
316
Köp
Spara som favorit
Skickas inom 5-8 vardagar.
Fri frakt inom Sverige för privatpersoner.
Here, for the first time in English, is an illuminating new German perspective on the decisive Blitzkrieg campaign of 1940. Karl-Heinz Frieser's account provides the definitive explanation for Germany's startling success and the equally surprising and rapid military collapse of France and Britain on the European continent. In a little over a month, Germany decisively defeated the Allies in battle, a task that had not been achieved in four years of brutal fighting during World War I. First published in 1995 as the official German history of the 1940 campaign in the west, the book goes beyond standard explanations to show that German victory was not inevitable and French defeat was not preordained. Contrary to the usual accounts of the campaign, Frieser illustrates that the military systems of both Germany and France were solid and that their campaign planning was sound. The key to victory or defeat, he argues, was the execution of operational plans-both preplanned and ad hoc-amid the eternal Clausewitzian combat factors of friction and the fog of war. Frieser shows why on the eve of the campaign the British and French leaders had good cause to be confident and why many German generals were understandably concerned that disaster was looming for them. This study explodes many of the myths concerning German Blitzkrieg warfare and the planning for the 1940 campaign. A groundbreaking new interpretation of a topic that has long interested students of military history, it is being published in cooperation with the Association of the U.S. Army.
Visa hela texten

"Well written and grounded in extensive archival research, Karl-Heinz Frieser's book provides the best explanation so far of the German victory in 1940. This English translation has been carefully checked not only in factual details but also in the nuances of complex explanations. The numerous detailed maps, found nowhere else in the extensive literature of the 1940 campaign, will be especially valuable to those visiting the battlefields." --COL. WILLIAM T. BOWERS, USA (RET.) formerly on the staff of the Fourth Allied Tactical Air Force (NATO) in Germany "The 1940 blitzkrieg in Western Europe was a key doctrinal turning point in modern warfare. But it was, as Colonel Frieser points out, neither seamless in execution nor widely agreed upon at various levels of command. This book, sure to be a classic of operational history, should also be a 'must-read' for those concerned with military innovation in time of war--such as the U.S. Army has experienced during the initial stages of Global War on Terrorism and particularly in the 2003 invasion of Iraq." --GENERAL GORDON R. SULLIVAN, U.S. ARMY (RET.), 32d Chief of Staff "Karl-Heinz Frieser's thorough research and first-rate analysis have demolished the myth of blitzkrieg and explained how the Germans achieved their miraculous success in May-June 1940. His important book adds considerably to our understanding of modern warfare." --BRIG. GEN. ROBERT A. DOUGHTY, U.S. ARMY (RET.) Head of the Department of History, West Point, from 1985-2005 author of Breaking Point: Sedan and the Fall of France, 1940

Karl-Heinz Frieser is a lieutenant colonel in the German Army and a trained military historian who has served for many years at the Militargeschictliches Forschungsamt (Military History Research Office) in Freiburg and Potsdam.