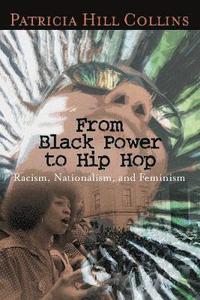 From Black Power to Hip Hop

"Her book offers a refreshing view of the politics on the ground, where people matter more than identities and the ideologies embedded within them." Ms. Magazine "Collins' lucid observations form the backdrop of her sustained engagement with nationalism, feminism, and racism in a collection that includes signature essays on topics as diverse as American national identity, the contemporary relevance of Afro centrism, and women's agency in black community politics." - Signs "Collins's work is always a pleasure to read. She deftly weaves historical analyses, popular culture, literature, and theory to produce a complex portrait of ongoing and systematic racism, relentlessly highlighting the interconnected dynamics of gender inequality as well as other systems of oppression. Each of these essays makes clear that any political response to racism must incorporate an intersectional approach." Gender and Society "The book can serve as good primer...Hill Collins' writing is always composed with a synthesis of historical analyses, popular culture, literature and theory that is often lacking in other academics' social scientific treatises. Any of the six essays within the text makes a clear case that either an organized-collective or individual response to racism, sexism, or capitalism must incorporate an intersectional approach." Souls: A Critical Journal of Black Politics, Culture and Society "The six essays in this volume explore the political realities of the period from the end of Black Power to the ascendancy of hip hop. They focus on the relationship between new racial formations and on political responses to them...A theme of the volume is Hill's endeavour to theorise intersectionality, and she focuses on the intersections between race, nation, and gender, to a lesser extent, social class. The aim of this book is to make a case for anti racist group based political struggles that respect individual and human rights which embrace a global analysis of how our lives are interconnected, and are informed by feminism and nationalism." Sage Race Relations Abstracts "In her new book Patricia Hill Collins reminds us why she is one of the most prolific and insightful sociologists to diagnose contemporary racial and sexual politics."-The African American Review, Spring 2008