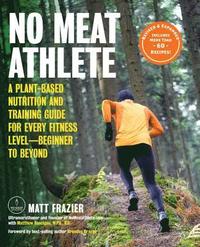 No Meat Athlete, Revised and Expanded

A Plant-Based Nutrition and Training Guide for Every Fitness Level-Beginner to Beyond [Includes More Than 60 Recipes!]

Köp
Spara som favorit
Kan levereras innan julafton!
Finns även som
Visa alla 1 format & utgåvor
No Meat Athlete is the plant-based guide you need to perform at your very best, no matter where you are on your fitness journey. Combining proven training plans, easy yet innovative recipes, and motivational stories into a unique fitness guide, healthy-living cookbook, and nutrition primer, No Meat Athlete is perfect for all athletes, from beginner to elite, who want to enjoy the health benefits of a meatless lifestyle. Veganism, already a top food trend and diet, is taking off in the sports world. The lifestyle has been adopted by Olympians, body builders, and boxers, as well as top athletes in the NBA and NFL. Hollywood is on board, too. James Cameron (director of Avatar and Titanic) has produced a film on the topic called The Gamechangers, which follows vegan athletes, including Arnold Schwarzenegger, US Olympian Kendrick James Farris, and surfer Tia Blanco. In No Meat Athlete, author, blogger, and hundred-mile ultramarathoner Matt Frazier will show you the many benefits to embracing a plant-based athletic lifestyle, including: Weight loss, which often leads to increased speed Easier digestion and faster recovery after workouts Improved energy levels to help not only athletic performance, but your daily life Reduced impact on the planet In this revised and updated edition, you'll also find new recipes, advice, and an all-new 12-week strength training plan designed to improve your overall fitness. Section I of the book provides practical advice for transitioning to a plant-based lifestyle, while ensuring you are getting all the nutrition you need. In Section II, Matt delivers training manuals of his own design for runners of all ability levels and ambitions, including tips for creating healthy habits, improving performance, and avoiding injuries. No Meat Athlete is your road map to top-notch performance, the plant-based way!
Visa hela texten

Matthew Ruscigno, M.P.H., R.D., holds two degrees in nutrition and is past chair of the Vegetarian Nutrition Dietary Practice Group of the Academy of Nutrition and Dietetics. In addition to his public health work, Matthew has a private practice and works closely with vegan athletes. An athlete himself, he has raced "The World's Toughest Iron-Distance Triathlon" in Eidfjord, Norway, ultra-marathons, and 24-hour mountain bike races. He is a 3-time finisher of the Furnace Creek 508, a 500-mile non-stop bike race that National Geographic calls the 8th hardest race in the world. Matthew contributed to the bestseller Appetite for Reduction: 125 Fast and Filling Low-Fat Vegan Recipes by Isa Chandra Moskowitz. Brendan Brazier is the formulator and cofounder of Vega, bestselling author of the Thrive book series, and editor in chief of Alive magazine. He's also a former professional Ironman triathlete and a two-time Canadian 50km Ultra Marathon Champion. Brendan is regarded as one of the world's leading authorities on plant-based performance nutrition and works with several NHL, NFL, MLB, UFC, and Olympic plant-based athletes. He lives in Asheville, North Carolina.

Foreword by Brendan Brazier Introduction How adopting a plant-based diet might just make you a better athlete, my story of qualifying for the Boston Marathon six months after I became a vegetarian, and how to use this book Section I: How Plant-Based Nutrition Can Work for Athletes [updated advice and sections added] Chapter 1: Food and Nutrition Philosophy (When Did Eating Become so Complicated?) What's wrong with our modern attitude toward food and what we can do to fix it Chapter 2: Getting Started: Creating a Healthy, Plant-based Eating Habit How to use the tools of habit to make a healthy diet last; a simple approach to eating right without counting calories or following complicated rules Chapter 3: An In-Depth Guide to Plant-based Nutrition for Sports Guidelines for getting everything you need to fuel your active lifestyle Chapter 4: In the Kitchen: Basic Cooking Skills to Save You Time, Energy, and Embarrassment Healthy, plant-based eating starts with getting into the kitchen-a quick-start guide to cooking fast, delicious meals Chapter 5: Recipes to Fuel Plant-Based Athletes (and their Families, too!) [10 new recipes added] 57 recipes for breakfast, lunch, dinner, desserts, snacks, and sports Section II: Running on Plants [updated advice and sections added] Chapter 6: How You Can Learn to Love Running The reasons that make running one of the best sports for getting in shape-and staying that way for life Chapter 7: How to Make Running a Habit Creating the running habit and the simplest approach to running safely and efficiently Chapter 8: Taking It to the Next Level with Advanced Training Techniques Workouts for serious training and workout-specific nutrition guidelines Chapter 9: The No Meat Athlete 12-Week Strength Plan [This is an all-new chapter.] Increase your overall athletic fitness with this 12-week strength program, created by vegan bodybuilder Robert Cheeke Chapter 10: Training for Your First (or Your Fastest) Race Running gets fun when you sign up for your first race; specific training plans for 5K, 10K, and half-marathon