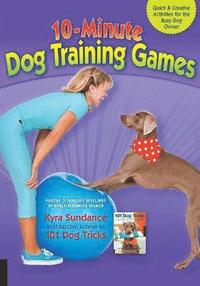 Kyra Sundance is a world-acclaimed stunt dog show performer, dog trainer, and internationally best-selling author. Her dog team performs live acrobatic shows on premier stages internationally; at circuses, professional sports halftime shows, and on movies and television shows such as The Tonight Show, Ellen, Entertainment Tonight, Worldwide Fido Awards, Animal Planet, Showdog Moms & Dads, and Beverly Hills Chihuahua 2. Kyra and her dogs starred in Disney's Underdog stage show and in a command performance at the palace in Marrakech for the king of Morocco. Kyra has written numerous popular dog-training books including the international best-selling 101 Dog Tricks, and hosts a line of award-winning dog-training DVDs. She also set-trains dog actors for movies and TV and lectures on positive dog-training methods. Kyra is nationally ranked in competitive dog sports, having trained, competed, and titled in a great number of dog sports. Her methods foster confident, happy dogs who are motivated to do the right thing rather than ones fearful of making a mistake. She shows us how to develop joyful relationships with dogs who balance enthusiasm with self-control. Kyra and her Weimaraners Chalcy and Jadie live with Kyra's husband on a ranch in California's Mojave desert.