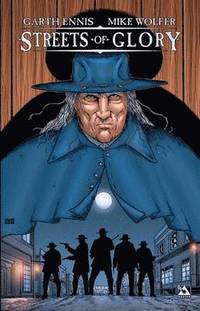 av Garth Ennis, Mike Wolfer
Inbunden Engelska, 2009-02-25
289
Köp
Spara som favorit
Finns även som
Visa alla 1 format & utgåvor
Garth Ennis (Preacher) and Mike Wolfer give new glory to the Old West in this blazing six-issue saga! Colonel Joseph Dunn is a man of honor, integrity, and one of the last bastions of the old guard. Joe has lived his life both as a soldier and a lone gun, but above all, someone that could be trusted to defend the common man with everything in him - and, if need be, the hot steel of death. Dunn has been away from Montana for more than 15 years, lost to all who know him. When he comes riding back into town, Dunn still represents the best of the past...but that era is quickly fading. It is 1899, and the world is changing, the future is coming. There are glorious new sights on the horizon, but a few things have changed too much, and the bad isn't to Dunn's liking. It's up to one man to make things right - a man that can stomach the task of bodies piling up, while the streets run red with glorious blood.
Visa hela texten

Garth Ennis, a critically acclaimed writer from Northern Ireland, has been working in the comic book industry for over 20 years, and is most easily recognized as the creator of Preacher, and long-time contributor to Marvel's Punisher. Perhaps his greatest success in recent years has been CROSSED, a horror survival series published by Avatar Press, in which the world has been overrun by sadistic homicidal maniacs. The CROSSED property has been optioned for film by Kevin Spacey' s Trigger Street Productions. Other Avatar publications by Ennis include STREETS OF GLORY, CHRONICLES OF WORMWOOD, and 303.