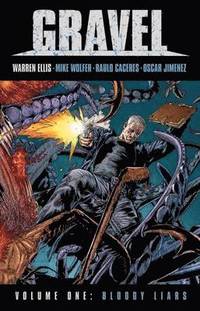 av Warren Ellis, Mike Wolfer, Raulo Caceres, Oscar Jimenez
Inbunden Engelska, 2009-05-28
279
Köp
Spara som favorit
Finns även som
Visa alla 1 format & utgåvor
William Gravel carves a bloody path of death in his first full-color collection! Long-buried and lost in antiquity, a unique book of magic once existed, filled with such extraordinary and arcane spells, supernatural rites, and inherent power that its possessor would be either unequaled - or driven irrevocably insane! Recently unearthed, the "Sigsand Manuscript" has been divided into six pieces and distributed among the Minor Seven, Britain's great Occult Detectives. With the Sigsand in their grasp, the Seven now wield more power than they were ever meant to possess...and William Gravel is not happy about it! Once a member of their Order but unceremoniously replaced within their ranks, the SAS Sergeant Major and Combat Magician is on a mission of revenge, redemption, and quite possibly rebirth, as he takes on the members of the Minor Seven, one-by-one! They all promised to use the unholy power wisely, but Gravel knows they are all Bloody Liars! "Gravel Volume 1" features the first eight issues (numbered 0-7) of this on-going series from Warren Ellis and co-writer Mike Wolfer, with art by Raulo Caceres and Oscar Jimenez, as well as a special cover gallery!
Visa hela texten

Warren Ellis is the award-winning British author of comic books, novels, and television, most often recognized for his sociocultural commentary and ground-breaking work in the genre of science fiction. His most recognizable works include Transmetropolitan, Planetary, and The Authority. He maintains a consistent online presence which includes the weekly delivery of the FREAKANGELS web comic to millions of fans. Ellis has published over 25 different creator-owned projects through Avatar Press (including BLACK SUMMER, IGNITION CITY, and GRAVEL, the last of which is in development as a film through Legendary Pictures), with many more planned.