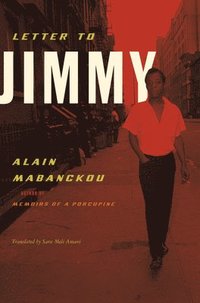 On the Twentieth Anniversary of Your Death

av Alain Mabanckou
Häftad Engelska, 2014-12-16
169
Köp
Spara som favorit
Skickas inom 5-8 vardagar.
Fri frakt inom Sverige för privatpersoner.
Written on the twentieth anniversary of James Baldwin's death, Letter to Jimmy is African writer Alain Mabanckou's ode to his literary hero and an effort to place Baldwin's life in context within the greater African diaspora. Beginning with a chance encounter with a beggar wandering along a Santa Monica beach--a man whose ragged clothes and unsteady gait remind the author of a character out of one of James Baldwin's novels-- Mabanckou uses his own experiences as an African living in the US as a launching pad to take readers on a fascinating tour of James Baldwin's life. As Mabanckou reads Baldwin's work, looks at pictures of him through the years, and explores Baldwin's checkered publishing history, he is always probing for answers about what it must have been like for the young Baldwin to live abroad as an African-American, to write obliquely about his own homosexuality, and to seek out mentors like Richard Wright and Ralph Ellison only to publicly reject them later. As Mabanckou travels to Paris, reads about French history and engages with contemporary readers, his letters to Baldwin grow more intimate and personal. He speaks to Baldwin as a peer--a writer who paved the way for his own work, and Mabanckou seems to believe, someone who might understand his experiences as an African expatriate.
Visa hela texten

"...a heartfelt tribute ...Mabanckou's essay displays a profound respect and admiration for his subject...They both also break ground with their literary work in trying to not let their art be restricted by perceptions of what is expected of them."World Literature Today "...as Mabanckou explores correlations between Baldwin's ideas and the contemporary world, the book really comes into its own...One of the most influential and fearless writers of the 20th century, Baldwin deserves this celebration of his life, so that readers may encounter, in a new light, the fortitude of this true revolutionary." --Publishers Weekly "...a touching and personal tribute to James Baldwin...Mabanckou has written an odd, emotional, and quite beautiful homage to a writer who remains a major African American voice almost 27 years after his death." --Booklist "This short book provides many insights into the life and work of James Baldwin (1924-1987)... Deeply intimate, Letter to Jimmy is a tribute from one expatriate writer to another who achieved his dream of becoming 'an honest man and a good writer." --Gay & Lesbian Review

Alain Mabanckou was born in Congo-Brazzavile in 1966. He is the author of Broken Glass (Soft Skull 2010), Memoirs of a Porcupine (Soft Skull 2006) and African Psycho (Soft Skull 2007) among others. He currently divides his time between Paris and California, where he teaches French Literature at UCLA.