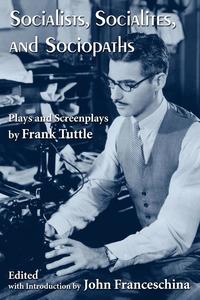 Plays and Screenplays by Frank Tuttle

av Frank Tuttle, Professor Emeritus Of Music John Franceschina
Häftad Engelska, 2007-01-01
259
Köp
Spara som favorit
Skickas inom 10-15 vardagar.
Fri frakt inom Sverige för privatpersoner.
Socialists, Socialites, and Sociopaths is a quartet of plays and screenplays written by Frank Tuttle between film directing assignments during the last twenty-five years of his life. Even more than his autobiography, They Started Talking, Tuttle's original plays reveal the wit and imagination that made him one of Hollywood's most sought after (if often underrated) directors of the 1920s and 30s. In addition the plays and screenplays provide vibrant behind-the-scenes views of the many facets of the entertainment industry as well as an honest portrayal of how politics and show business intersect with Tuttle's pacifist and socialist political views emerging loud and clear from the plays, though more subtly from the screenplays.
Visa hela texten