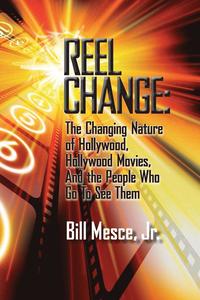 The Changing Nature of Hollywood, Hollywood Movies, and the People Who Go to See Them

av Jr Bill Mesce
Häftad Engelska, 2014-02-28
299
Köp
Spara som favorit
Skickas inom 5-8 vardagar.
Fri frakt inom Sverige för privatpersoner.
"The only place in the world that has more information about movies than Bill Mesce is Google, and when Google is stuck, it calls Bill. He loves and understands them: the classics, the disasters, where they have been and where they are headed. He is an incredible writer and takes you into them in a way that opens new understanding of why they are the way they are and how they got that way. The next best thing to going to the movies is to read what Bill Mesce has to say about them." Bill Persky, Five-time Emmy Award-winning writer and director The Dick Van Dyke Show, The Bill Cosby Special, Kate & Allie, and creator of That Girl. "Smart, insightful and often funny, Bill Mesce 's essays are the best reminder I can find in print of why I love movies. Whether one knows the films he writes about well or just a bit, it's a joy to have Bill take you into his world of movies." Josh Sapan, CEO and President, AMC Networks "If you want the hidden story of the men and women who made Hollywood what it is today, the good the bad and the ugly, from an unconventional savant, then Bill Mesce's tour is the book for you." Jeff Bewkes, Chairman and CEO, Time Warner "Bill Mesce's Reel Change is a book that any filmgoer, film lover, or film historian should read. It is full of smart and witty anecdotes and insightful historical commentary about the personal and emotional relationships to the magical and transformative experience that is watching movies." Andrew Goldman VP, HBO/Cinemax Program Planning and Scheduling Adjunct Professor, Tisch School of the Arts, New York University "Mesce's book is pure, red meat cinema (Blondes! Bond! Peckinpah! Tarantino!), he writes entertainingly and well about the movies and movie makers that got most of us going to the multiplex in the first place." David Breckman Co-executive producer of the Emmy-winning crime series, Monk
Visa hela texten