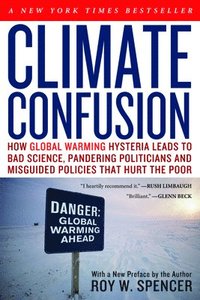 av Roy W Spencer
Häftad Engelska, 2010-02-25
131
Köp
Spara som favorit
Finns även som
Visa alla 2 format & utgåvor
The current frenzy over global warming has galvanized the public and cost taxpayers billons of dollars in federal expenditures for climate research. It has spawned Hollywood blockbusters and inspired major political movements. It has given a higher calling to celebrities and built a lucrative industry for scores of eager scientists. In short, ending climate change has become a national crusade. And yet, despite this dominant and sprawling campaign, the facts behind global warming remain as confounding as ever. In Climate Confusion, distinguished climatologist Dr. Roy Spencer observes that our obsession with global warming has only clouded the issue. Forsaking blindingly technical statistics and doomsday scenarios, Dr. Spencer explains in simple terms how the climate system really works, why man's role in global warming is more myth than science, and how the global warming hype has corrupted Washington and the scientific community. The reasons, Spencer explains, are numerous: biases in governmental funding of scientific research, our misconceptions about science and basic economics, even our religious beliefs and worldviews. From Al Gore to Leonardo DiCaprio, the climate change industry has given a platform to leading figures from all walks of life, as pandering politicians, demagogues and biased scientists forge a self-interested movement whose proposed policy initiatives could ultimately devastate the economies of those developing countries they purport to aid. Climate Confusion is a much needed wake up call for all of us on planet earth. Dr. Spencer's clear-eyed approach, combined with his sharp wit and intellect, brings transparency and levity to the issue of global warming, as he takes on wrong-headed attitudes and misguided beliefs that have led to our state of panic. Climate Confusion lifts the shroud of mystery that has hovered here for far too long and offers an end to this frenzy of misinformation in our lives.
Visa hela texten

"If you have an interest in global warming, but are intimidated by equations and scientific terminology, this book is for you. The author explores the philosophy of global warming (and cooling), examines the limitations of global numerical models for which all alarmist statements are based, and discusses the economics of alternative actions that might be pursued. This book is an excellent read!" -- Neil L Frank Former Director National Hurricane Center "Climate Confusion is the best book length treatment of global warming science that is available to the literate citizen. The title says it all. Spencer explains the broad agreement over the existence of some climate change and the existence of some human role, but he also explains why these have little to do with the implausible and overheated projections of environmental disaster. The author thus cuts through all the rhetorical brickbats of "denialism" and "salvationism" to allow the citizen to reach rational conclusions. Despite a light touch, Spencer does not pull punches when it comes to unclothing the moral pretenses of many in the environmental movement--pretenses often disguising some truly immoral agendas." &mdas Richard S. Lindzen Alfred P. Sloan Professor of Atmospheric Sciences, Massachusetts Institute of Technology "An outstanding discussion of the many scientific, political and religious problems associated with the acceptance that humans are the primary cause of global warming. A must read for anyone wanting a full and balanced understanding of the global warming debate." &mdas William M. Gray Professor Emeritus, Department of Atmospheric Science Colorado State University "Roy Spencer's Climate Confusion is needed to put the global warming hysteria in its rightful place. He has done a yeoman's job in making the issue understandable and accessible to the general public without a sacrifice in the rigor of his arguments." &mdas Walter E. Williams John M. Olin Distinguished Professor of Economics George Mason University

Roy W. Spencer is a Principal Research Scientist at the University of Alabama in Huntsville. He was formerly a Senior Scientist for Climate Studies at NASA. He is co-developer of the original satellite method for precise monitoring of global temperatures from Earth-orbiting satellites. He has provided congressional testimony several times on the subject of global warming and authored the 2008 New York Times bestseller, Climate Confusion.