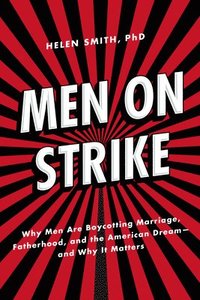 Why Men Are Boycotting Marriage, Fatherhood, and the American Dream - and Why It Matters

av Helen Smith
Inbunden Engelska, 2013-06-20
239
Bevaka
Spara som favorit
Tillfälligt slut – klicka "Bevaka" för att få ett mejl så fort boken går att köpa igen.
Finns även som
Visa alla 2 format & utgåvor
American society has become anti-male. Men are sensing the backlash and are consciously and unconsciously going "on strike." They are dropping out of college, leaving the workforce and avoiding marriage and fatherhood at alarming rates. The trend is so pronounced that a number of books have been written about this "man-child" phenomenon, concluding that men have taken a vacation from responsibility simply because they can. But why should men participate in a system that seems to be increasingly stacked against them? As Men on Strike demonstrates, men aren't dropping out because they are stuck in arrested development. They are instead acting rationally in response to the lack of incentives society offers them to be responsible fathers, husbands and providers. In addition, men are going on strike, either consciously or unconsciously, because they do not want to be injured by the myriad of laws, attitudes and hostility against them for the crime of happening to be male in the twenty-first century. Men are starting to fight back against the backlash. Men on Strike explains their battle cry.
Visa hela texten

Helen Smith, PhD, is a psychologist specializing in forensic issues and men's issues in Knoxville, Tennessee. She holds a PhD from the University of Tennessee and master's degrees from The New School for Social Research and the City University of New York. She has written The Scarred Heart: Understanding and Identifying Kids Who Kill and was writer and executive producer of Six, a documentary about the murder of a family in Tennessee by teens from Kentucky. She has worked with men (as well as women and children) in her private practice for more than twenty years. She has been on numerous television and radio shows including Montel Williams and has appeared on E! Entertainment, Fox News, Discovery, Women's Entertainment, Biography, Oxygen and The Learning Channel. Smith has written for numerous publications including the Los Angeles Times, The Christian Science Monitor and The Cleveland Plain Dealer. She occasionally hosts a show at PJTV focusing on men's issues, psychology and politics. She has written on her blog at drhelen.blogspot.com since 2005 on men's rights, men's issues and psychology and is now a columnist and blogger at PJ Media. Her blog is at pjmedia.com/drhelen.