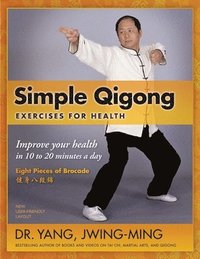 Improve Your Health in 10 to 20 Minutes a Day

av Dr Yang Jwing-Ming
Häftad Engelska, 2013-10-17
179
Köp
Spara som favorit
Skickas inom 7-10 vardagar.
Fri frakt inom Sverige för privatpersoner.
Kan levereras innan jul!
Honorable Mention - 2014 Eric Hoffer Award This book offers beginner a smart way to learn qigong (chi kung), the ancient Chinese system of gentle breathing, stretching, and strengthening movements. You will use the Eight Pieces of Brocade, one of the most popular qigong healing exercise sets, to improve your overall health and well-being. Commonly known in China as the Ba Duan Jin, these exercises have been practiced for over 1,000 years. Choose the sitting set, the standing set, or both. Learn how to activate the qi energy and blood circulation in your body, helping to stimulate your immune system, strengthen your internal organs, and give you abundant energy. *Clear photographs show you correct postures*Concise instructions tell you what to do*Details inform you how the movements help*Qigong theory explains why the exercises work*Translations of ancient Chinese poetry provide key concepts to help you improve your practice No matter your age or your physical condition, the Eight Pieces of Brocade is a wonderful way to improve your health and well-being.
Visa hela texten

One of the most sought-after instructors of Qigong The Omega Institute Author of the Year 11th World Congress on Qigong and the American Qigong Assoc. One of the 10 people who has made the greatest impact on martial arts in the past 100 years Inside Kung Fu Magazine

Dr. Yang, Jwing-Ming, PhD is a world-renowned author, scholar, and teacher of Tai chi chuan. He has been involved in Chinese martial arts since 1961 and maintains over 55 schools in 18 countries. His writing and teaching include the subjects of kung fu, tai chi chuan, massage, meditation, chin na, and he is a leading authority on qigong. He is the author of over 35 books and 80 videos. Dr. Yang, Jwing-Ming resides at his California Retreat Center near Eureka California.