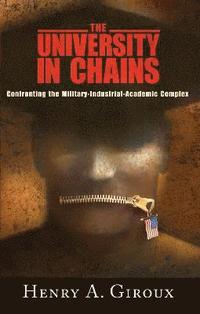 av Henry A Giroux
Häftad Engelska, 2007-06-01
519
Köp
Spara som favorit
Finns även som
Visa alla 3 format & utgåvor
President Eisenhower originally included 'academic' in the draft of his landmark, oft-quoted speech on the military-industrial-complex. Giroux tells why Eisenhower saw the academy as part of the famous complex - and how his warning was vitally prescient for 21st-century America. Giroux details the sweeping post-9/11 assault being waged on the academy by militarization, corporatization, and right-wing fundamentalists who increasingly view critical thought itself as a threat to the dominant political order. Giroux argues that the university has become a handmaiden of the Pentagon and corporate interests, it has lost its claim to independence and critical learning and has compromised its role as a democratic public sphere. And yet, in spite of its present embattled status and the inroads made by corporate power, the defense industries, and the right wing extremists, Giroux defends the university as one of the few public spaces left capable of raising important questions and educating students to be critical and engaged agents. He concludes by making a strong case for reclaiming it as a democratic public sphere.
Visa hela texten

"I know of no more acute a commentator on higher education in the United States today. Profound and unsparing, Giroux's book concludes with an imaginative strategy to transform the university into a truly democratic institution." -Howard Zinn "In this book Giroux continues to develop his analysis of higher education in the U.S., adding to the voluminous body of work he has published over the past 30 years. He writes from the standpoint of a public intellectual and from within the school of thought founded by Paulo Freire. ... Recommended." -CHOICE "Should be read as a clarion call to summon back an administration caught in a near-death experience and to waken a slumbering faculty to the dangers in our hallowed halls ... The University in Chains is required reading for everyone in higher education. Buy several copies for your department. Distribute it widely." -Richard A. Quantz in Educational Studies "The University in Chains could be the single reason why 'higher' education might be saved from the hands of corporatization and militarization. ... [The book] provides crucial insights and an antidote to the state of universities today that those concerned with human rights, anti-war, critical pedagogy, and freedom of critical thought and higher education will find of great value. Giroux's brilliant design of the book, from the development of corporate universities to the relationship between military and academia, ends not in hopelessness, but in a call to break the chains of these dominating industrial complexes, and to proclaim that the protection of academia is the most important battle that students, faculty, and staff must unite together to fight for!" -Political Media Review "The University in Chains should be essential reading for everyone inside and outside the academy concerned with the increasing and foreboding militarization of the world,... Giroux's call for a pedagogy of critical conviction, political engagement and social intervention is imperative in the continuing struggle to overcome practical politics powerlessness, reclaim public space as a democratic sphere, and break the chain of injustice and oppression." -Scott D. Morris, College of Education and Technology at Eastern New Mexico University, in Dissident Voice "Henry A. Giroux has done it again. In his usual passionate and inspiring mode of intensive scrutiny, theoretical engagement, and faith in the future of social change, he has diagnosed, diagrammed, and interrogated a glaring political problem of our times. ... The University in Chains employs new research and concepts in humanities scholarship in order to explain the deepening assault on democracy instigated through the War on Terror, the expansion of neoliberalism, and the influence of ideological fundamentalism on political life." -Robin Truth Goodman in American Book Review "... In this book, Giroux proves that he is not simply an engaged intellectual, but an intellectual whose work has been dedicated to salvaging the public sphere (that is, the academy) within an inclusive democracy. Giroux urges us to believe that higher education represents one of the most important sites over which the battle for democracy is being waged." -Sheila L. Macrine, Montclair State University, in Academe, American Association of University Professors "Henry Giroux is a tribune for democracy. He sees universities as democratic public spheres that must be defended in the repressive aftermath of 9/11. His new book is a tool we need to get the job done." -Ira Shor, CUNY Graduate School "Henry Giroux has been like a canary in the mine of U.S. culture-when he sends an alert, you know something is really amiss. If you have worked or studied in one of our universities, this is essential reading." -Toby Miller, author of Cultural Citizenship

Henry A. Giroux currently holds the Global TV Network Chair Professorship at McMaster University in the English and Cultural Studies Department. His most recent books include The University in Chains: Confronting the Military-Industrial-Academic Complex (2007) and Against the Terror of Neoliberalism (2008).

"I know of no more acute a commentator on higher education in the United States today. Henry Giroux's passion for education fires his powerful critique of the university, as it becomes more and more in thrall to big money and to the military. While Giroux's analysis is profound and unsparing, his book concludes with an imaginative strategy to transform the university into a truly democratic institution."