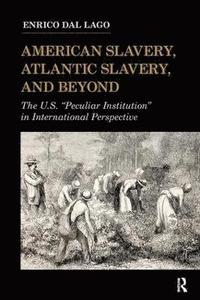 American Slavery, Atlantic Slavery, and Beyond

av Enrico Dal Lago
Häftad Engelska, 2013-06-20
589
Köp
Spara som favorit
Finns även som
Visa alla 3 format & utgåvor
American Slavery, Atlantic Slavery, and Beyond provides an up-to-date summary of past and present views of American slavery in international perspective and suggests new directions for current and future comparative scholarship. It argues that we can better understand the nature and meaning of American slavery and antislavery if we place them clearly within a Euro-American context. Current scholarship on American slavery acknowledges the importance of the continental and Atlantic dimensions of the historical phenomenon, comparing it often with slavery in the Caribbean and Latin America. However, since the 1980s, a handful of studies has looked further and has compared American slavery with European forms of unfree and nominally free labor. Building on this innovative scholarship, this book treats the U.S. "peculiar institution" as part of both an Atlantic and a wider Euro-American world. It shows how the Euro-American context is no less crucial than the Atlantic one in understanding colonial slavery and the American Revolution in an age of global enlightenment, reformism, and revolutionary upheavals; the Cotton Kingdom's heyday in a world of systems of unfree labor; and the making of radical Abolitionism and the occurrence of the American Civil War at a time when nationalist ideologies and nation-building movements were widespread.
Visa hela texten

"In this bracing new book...Dal Lago incorporates a full range of the most recent scholarship, providing an up-to-date primer on how a transcontinental plantation complex came into being before disruptions of the late eighteenth century ushered in an equally far-flung age of emancipation." -The Journal of Southern History "In this small but ambitious book, Dal Lago seeks to extend recent research on the comparative history of forced labor regimes, inspired by Kolchin's pioneerting study of American slavery and Russian serfdom. Dal Lago reviews the ground covered by Kolchin but also widens the study to forced or bonded labor to embrace Brazilian slavery, African slavery, and Iberian societies with forms of bonded labor. The chronological scope of his new book is as broad as its geographical range. It begins with the founding of African chattel slavery in Brazil and Spanish America during the sixteenth century and concludes with the efforts formally to end slavery in the Americas in the late nineteenth century...This book will appeal primarily to students." -Journal of Interdisciplinary History "A thoughtful and informative volume. Enrico Dal Lago provides a valuable guide to--and synthesis of--the proliferating historical literature on American slavery in comparative perspective." -Peter Kolchin, University of Delaware and author of American Slavery "Enrico Dal Lago expertly places the study of American slavery in both its international and scholarly contexts. This is a most impressive achievement and an invaluable service to all students of human bondage and emancipation." -Bruce Levine, J. G. Randall Distinguished Professor of History and Professor of African American Studies, University of Illinois at Urbana-Champaign "American Slavery, Atlantic Slavery, and Beyond is a brilliantly ambitious and staggeringly useful compendium of the latest ideas in comparative slavery with insight and information crammed into its compact and creative framework. Dal Lago's achievement is considerable and we are all in his debt." -Catherine Clinton, Queen's University Belfast "Enrico Dal Lago has produced an insightful, stimulating, and timely contribution to ongoing efforts to overcome the legacy of 'American exceptionalism' in the history of slavery. His comprehensive and lucid interpretive summary of method, historiography, and history opens new perspectives for research and will be useful for students and established scholars alike." -Dale Tomich, Binghamton University

Enrico Dal Lago teaches American History at the National University of Ireland, Galway. He is the author of Agrarian Elites: American Slaveholders and Southern Italian Landowners, 1815-1861 (2005) and co-editor of and contributor to three additional books on slavery. He is completing a monograph comparing American abolitionist William Lloyd Garrison with Italian nationalist Giuseppe Mazzini.