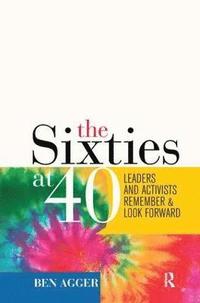 av Ben Agger
Inbunden Engelska, 2009-06-30
2779
Köp
Spara som favorit
Finns även som
Visa alla 3 format & utgåvor
Based on recent interviews, this unique sixties book brings together the voices of the Left leaders who spawned the sixties movements. Many remain activists today, and experience and the passage of time allow them to transcend nostalgia to form more realistic perspectives on past, present, and future. They discuss the civil rights and antiwar movements, the political outcome of the sixties, patriotism, terror, and the role of young people in the future. Important gains were made during the sixties, but there were many setbacks, too, that influence today's voters, leaders, candidates, and our day-to-day realities. The sixties of this book are not simply a sweet memory of marijuana and album rock; there were many casualties, including innocence and youthful idealism. Agger concludes with reflections on the possibilities of a next Left, which was already faintly visible in young people's massive support of Obama's presidential candidacy.
Visa hela texten

"[A] useful and different book offering insights on the storied decade of the 1960s. ... A narrative timeline provides a valuable overview of people and events. ... an invigorating and hopeful book." -Library Journal From The Sixties at 40: "I was not governed completely by ideology, I was governed by experience ... and my experiences were contradictory." -Tom Hayden "To a very great extent I would call the project of the sixties a democratization project. It's still an ongoing and viable living practice in the U.S. and in other parts of the world." -Richard Flacks "I don't talk about myself as a Leftist, because we're not a factor. We are not a political entity. I'm a union activist, I'm an environmental activist, a peace activist, but I wouldn't say there is a Left." -Mark Rudd "Obama's campaign was a movement campaign, an insurgency-in large measure the product of a popular mobilization, passionate and well-organized, cross-demographic, the best of amateur politics harnessed to professional party intelligence." -Todd Gitlin "The extent to which the Left is able to ... hold Barack Obama accountable to a peace and justice agenda is the extent to which we move closer to a more democratic society and a more peaceful global existence." -Fran Beal "The main thing I took from Camus was the idea that in this struggle for human betterment you had to walk a fine line so that you were neither a victim nor an executioner. And that, really, was very helpful going through all of the different twists and turns of the movement in the sixties." -Robert Moses

Ben Agger is the author of many previous books on Media and Critical Theory, including Postponing the Postmodern: Sociological Practices, Selves, and Theories (2002).