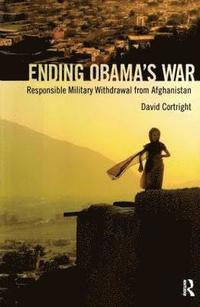 "In his new book, David Cortright makes a compelling case for a comprehensive calibrated strategy of military disengagement that offers the U.S. and its partners the most realistic chance of achieving their objectives in Afghanistan and the region in a cost-effective and timely manner." -Lawrence J. Korb, former Assistant Secretary of Defense "A balanced, well-documented critique of the war in Afghanistan combined with a thoughtful plan for reducing our military footprint responsibly. Essential reading for those seeking a new way forward in Afghanistan." -Lt. General (USA, Ret.) Robert G. Gard, Jr., PhD "An important new work by a leading scholar of international security. In this short volume, David Cortright presents clear and practical proposals for drawing down troops in Afghanistan in ways that can protect American interests and enhance the political destiny of the Afghan people, both women and men. Anyone interested in American security and the future of Afghanistan, beginning with President Obama, should read this thought-provoking and lucid book." -Janne Nolan, Director of Nuclear Security at the American Security Project and former State and Defense Department advisor "As President Obama escalated the war in Afghanistan, now in its tenth year, Cortright (policy studies, U. of Notre Dame) came to have increasing misgivings over the US military presence there but remained worried that withdrawing militarily could lead to the return of the Taliban and their oppression of women and violations of human rights (which, one presumes, he believes to be categorically worse than the current government's oppression of women and violation of human rights). Having come to the conclusion that military 'solutions' are only making matters worse, this volume represents his attempt to resolve that dilemma by proffering diplomatic, political, economic, and social alternatives to military means that he believes can help to achieve greater security and stability in Afrghanistan while protecting human rights. Essentially, he calls for military withdrawal accompanied by increased spending on development and improved governance in order 'to exert leverage on both the Taliban and the Kabul government.' He also calls for a Muslim-led interim security protection force to be introduced as NATO troops withdraw and greater diplomatic involvement by states neighboring Afghanistan." --Eithne O'Leyne, June 2011 Reference and Research Book News

David Cortright is Professor at the Joan B. Kroc Institute for International Peace Studies at the University of Notre Dame. His books include Soldiers in Revolt: GI Resistance During the Vietnam War (2005) and A Peaceful Superpower: The Movement Against War in Iraq (2004).