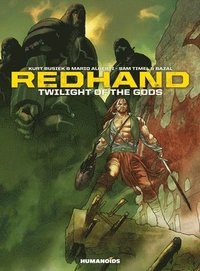 Redhand: Twilight Of The Gods

av Kurt Busiek, Sam Timel
Häftad Engelska, 2015-11-13
229
Köp
Spara som favorit
Skickas inom 5-8 vardagar.
Gratis frakt inom Sverige över 159 kr för privatpersoner.
The perfect warrior is unleashed in an age of barbarism and magic, but all he wants is the peaceful life he's destined never to have. Touched by a prophecy, imbued with incredible fighting skills and immune to magic, he is fated to one day destroy the gods. ButRedhand has no interest in this prediction, and no use for his destiny. Yet how can a man escape his own fate? This violent and intelligent story, set in a post-apocalyptic, primitive world, challenges and enthralls.
Visa hela texten

- Kurt Busiek is a respected American writer of numerous comics including "Astro City" (Image/DC Comics), "The Avengers," for Best Writer.

Kurt Busiek has been writing comics professionally since three days before he graduated from college in 1982, when he sold a "Tales of the Green Lantern Corps" backup story that appeared in "Green Lantern #162." Since then, he's worked on just about everything from "Action Comics" to "Zot!," including runs on "Avengers," "Superman," "Conan" and others, and has co-created "Thunderbolts," "The Autumnlands," "Arrowsmith" and more. He's best known for his work on the multiple-award-winning "Marvels" and "Astro City." Mario Alberti is an award-winning Italian artist who has illustrated "Nathan Never" (Sergio Bonnelli) and several covers for DC Comics and the bestselling "Spider-Man & the X-Men" (Marvel). Sam Timel is an American author known for writing the series "Milan K." and contributing to "Redhand: Twilight of the Gods". Bazal (Oscar Bazaldua) is a veteran Mexican comics artist whose work includes "Retroworld," also from Humanoids.