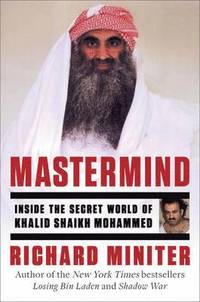 Inside the Secret World of Khalid Shaikh Mohammed

av Richard Miniter
Inbunden Engelska, 2011-04-27
379
Köp
Spara som favorit
Specialorder (osäker tillgång). Skickas inom 11-20 vardagar.
Fri frakt inom Sverige för privatpersoner.
Khalid Shaikh Mohammed, the architect of the 9/11 attacks, has carried out many of the biggest terrorist plots of the past 20 years. As the world awaits his trial, bestselling author and investigative journalist Richard Miniter brings to life his shocking true story. Based on more than 100 interviews with government officials, generals, diplomats and spies and on-the-ground reporting from across the world, Miniter reveals never-before-reported Al-Qaeda plots and surprising new details about the 9/11 attacks.
Visa hela texten

Advance Praise for "Mastermind" ""Mastermind" is a heart-pounding read that not only reveals the never before told story of KSM and his terrorist plots, but also the politics surrounding his capture and possible trial. Miniter has it all. If you want the real story behind KSM from beginning to end you must read this book." -Richard Perle, former assistant secretary of defense "In telling the full story of KSM, Richard Miniter also reveals the conditions that bred so many other dangerous terrorists-conditions that persist today as much as ever. This is a fascinating book and a must read for those who want to understand the greatest threat to our nation's security." -General Richard B. Myers, ret., former chairman, Joint Chiefs of Staff "An absolutely captivating biography of the wheelhorse of Islamist terror. Learn, for example, how the FBI's insistence on unnecessary formalities in 1996 left Khalid Shaikh Mohammed free to plot and direct 9/11. Impos