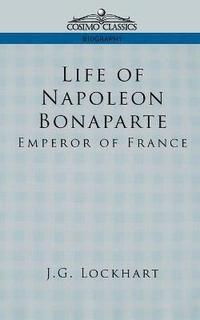 There are various orders of greatness among which a great man may be classed. This first, because the highest, is moral greatness, where the soul binds itself to virtue, and passes its life in strict adherence to duty and truth . . . [w]hatever may befall it, nothing can shake its virtue.

By the age of 25, a disgraced, despondent, and suicidal Napoleon Bonaparte (1799-1813) had been expelled from the army. One year later, he was the youngest general in France, and was winning victories with ragged troops who were at the point of starvation.

In this exceptional biography, John Gibson Lockhart examines the life and career of the man who became France's foremost military leader and, in the process, gained the love of his people.

AUTHOR BIO:
John Gibson Lockhart (1794-1854) was a Scottish lawyer, editor, literary critic, and biographer. A major contributor to Blackwood's Magazine, Lockhart was also editor of and contributor to the Quarterly Review from 1825 to 1853. He became known as "The Scorpion" because of the fierceness of his criticism.

Among his works are a volume of adaptations (1823) of ancient Spanish ballads, several novels, and the seven-volume Memoirs of the Life of Sir Walter Scott (1837-38). It is generally ranked among English biographies as second only to Boswell's Johnson.
Visa hela texten