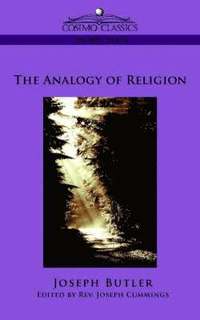 The Analogy of Religion

av Joseph Butler, Joseph Cummings
Häftad Engelska, 2005-11-01
289
Köp
Spara som favorit
Finns även som
Visa alla 4 format & utgåvor
I express myself with caution, lest I should be mistaken to vilify reason; which is indeed the only faculty we have wherewith to judge concerning anything.
-from The Analogy of Religion

Elegantly written and forceful in its arguments, this rebuttal to pre-Darwinistic Deism, first published in England in 1736, is a compelling defense of Christianity bursting with humanity and compassion, from the perspective of the era's limited understanding of biology, geology, cosmology, and other advanced sciences we take for granted today.

This annotated edition, prepared in 1875 by an American theologian, is a must-read for anyone hoping to understand the foundations of the war contemporary fundamentalist Christians have taken to the modern scientific community. It serves as a reminder that, as Butler notes: "Language is, in its very nature, inadequate, ambiguous, liable to infinite abuse, even from negligence; and so liable to it from design, that every man can deceive and betray by it."

British theologian JOSEPH BUTLER (1692-1752) was educated at Oxford University and appointed bishop of Dunham in 1750, a position he held until his death.

American educator and theologian Joseph Cummings (b. 1817) was educated at Wesleyan University, where he later served as the institution's president, from 1857 to 1875; in 1881 he was appointed president of Northwestern University.
Visa hela texten