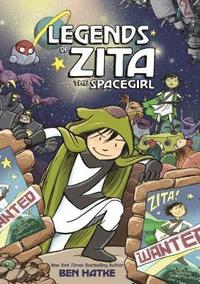 Legends of Zita the Spacegirl

av Ben Hatke
(1 röst)
Häftad Engelska, 2012-09-04
182
Köp
Spara som favorit
Finns även som
Visa alla 1 format & utgåvor
A NEW YORK TIMES BESTSELLERBen Hatke brings back our intrepid space heroine for another delightful sci-fi/fantasy adventure. Zita is determined to find her way home to earth, following the events of the first book. But things are never simple, and certainly never easy, in space. Zita's exploits from her first adventure have made her an intergalactic megastar! But she's about to find out that fame doesn't come without a price. And who can you trust when your true self is being eclipsed by your public persona, and you've got a robot doppelganger wreaking havoc ...while wearing your face? Still, if anyone can find their way through this intractible mess of mistaken identity and alien invaders, it's the indomitable Zita, in "Legends of Zita the Spacegirl."Legends of Zita the Spacegirl" is one of "Kirkus Reviews'" Best Children's Books of 2012.
Visa hela texten

Zita's moxie is positively contagious, and her adventures are un-put-downable. Readers would be hard-pressed to not find something to like in these tales; they're a winning formula of eye-catching aesthetics and plot and creativity, adeptly executed. "Kirkus Reviews, starred review"

Ben Hatke's first graphic novel was "Zita the Spacegirl." He has published comics stories in the Flight series as well as "Flight Explorer." In addition to writing and drawing comics, he also paints in the naturalist tradition and, occasionally, performs one-man fire shows.Hatke lives and works in the Shenandoah Valley with his wife and their boisterous pack of daughters.