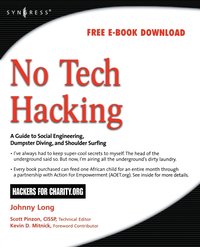 No Tech Hacking: A Guide to Social Engineering, Dumpster Diving, and Shoulder Surfing

av Johnny Long
Häftad Engelska, 2008-04-01
299
Köp
Spara som favorit
Skickas inom 10-15 vardagar.
Gratis frakt inom Sverige över 159 kr för privatpersoner.
As the clich reminds us, information is power. In this age of computer systems and technology, an increasing majority of the world's information is stored electronically. It makes sense then that as an industry we rely on high-tech electronic protection systems to guard that information. As a professional hacker, I get paid to uncover weaknesses in those systems and exploit them. Whether breaking into buildings or slipping past industrial-grade firewalls, my goal has always been the same: extract the informational secrets using any means necessary. After hundreds of jobs, I discovered the secret to bypassing every conceivable high-tech security system. This book reveals those secrets, and as the title suggests, it has nothing to do with high technology. As it turns out, the secret isn't much of a secret at all. Hackers have known about these techniques for years. Presented in a light, accessible style, you'll get to ride shotgun with the authors on successful real-world break-ins as they share photos, videos and stories that prove how vulnerable the high-tech world is to no-tech attacks.

As you browse this book, you'll hear old familiar terms like "dumpster diving", "social engineering", and "shoulder surfing". Some of these terms have drifted into obscurity to the point of becoming industry folklore; the tactics of the pre-dawn information age. But make no mistake; these and other old-school tactics work with amazing effectiveness today. In fact, there's a very good chance that someone in your organization will fall victim to one or more of these attacks this year. Will they be ready?

. Dumpster Diving
Be a good sport and don't read the two "D" words written in big bold letters above, and act surprised when I tell you hackers can accomplish this without relying on a single bit of technology (punny).
. Tailgating
Hackers and ninja both like wearing black, and they do share the ability to slip inside a building and blend with the shadows.
. Shoulder Surfing
If you like having a screen on your laptop so you can see what you're working on, don't read this chapter.
. Physical Security
Locks are serious business and lock technicians are true engineers, most backed with years of hands-on experience. But what happens when you take the age-old respected profession of the locksmith and sprinkle it with hacker ingenuity?
. Social Engineering with Jack Wiles
Jack has trained hundreds of federal agents, corporate attorneys, CEOs and internal auditors on computer crime and security-related topics. His unforgettable presentations are filled with three decades of personal "war stories" from the trenches of Information Security and Physical Security.
. Google Hacking
A hacker doesn't even need his own computer to do the necessary research. If he can make it to a public library, Kinko's or Internet cafe, he can use Google to process all that data into something useful.
. P2P...
Visa hela texten

Johnny Long is a professional hacker and security researcher for Computer Sciences Corporation. Johnny has written or contributed to several books, including Google Hacking for Penetration Tester from Syngress Publishing, which has secured rave reviews. Kevin Mitnick (Technical Editor) is the most famous computer hacker in the world. Since his first arrest in 1981, at age 17, he has spent nearly half his adult life either in prison or as a fugitive. He has been the subject of three books and his alleged 1982 hack into NORAD inspired the movie War Games. Since his plea-bargain release in 2000, he says he has reformed and is devoting his talents to helping computer security.