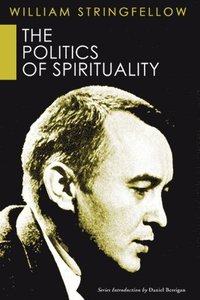 The Politics of Spirituality

av William Stringfellow
Häftad Engelska, 2006-01-01
159
Köp
Spara som favorit
Spirituality, according to William Stringfellow, represents the ordinary experience of partaking in politics - the activity of the Word of God in judgment over all that belongs to human history. He criticizes religiosity, advocating instead for a biblical holiness that implies wholeness for all creation. He takes a prophetic and somber view of the present dark ages, characterized as they are by hypocrisy, profligate consumption, disregard for human life, and dependence on nuclear force. Speaking from a lifetime of experience and reflection, Stringfellow issues a call to conscience and sanity, a reaffirmation of the incarnation, and belief in the grace of the Word of God who transcends the injustice of the present age and agitates the resilience of those who struggle to expose and rebuke injustice.
Visa hela texten

dissenter in a great society

the politics of spirituality

"because stringfellow's critique was radically biblical and biblically radical, he was no party-line dissenter. if one marks the current three volumes by their historical moments, they can be identified as responses to incumbent political administrations. dissenter in a great society (1966) illuminates the lyndon johnson era. suspect tenderness (1971) critiques the nixon regime. and politics of spirituality (1984), in many ways stringfellow's culminating little opus, responds to the blasphemies of the reagan administration."

bill wylie-kellermann (from the series foreword)

"these books burn with a holy fervor. they are graced with costly hope; what is impossible in the public arena can be done up close, with a few by a few. there could exist communities of non-betrayal. its members would gather, open the bible, then scatter to their work. freed from lust after power or prestige, they would keep the word of god in a time when few keep any word at all. keeping the word, that was the point. do it then!"

daniel berrigan (from the series introduction)

William Stringfellow was a practicing attorney and a prominent Episcopalian layman, who frequently contributed to legal and theological journals. After his graduation from Harvard Law School, he practiced some years in the East Harlem neighborhood in New York City. He was a visiting lecturer at several law schools and lectured at theological seminaries across the country.