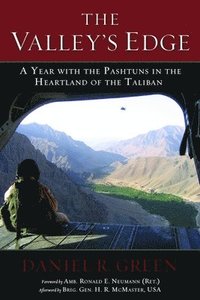 A Year with the Pashtuns in the Heartland of the Taliban

av Daniel R Green
Inbunden Engelska, 2011-11-01
229
Köp
Spara som favorit
Skickas inom 7-10 vardagar.
Fri frakt inom Sverige för privatpersoner.
In this gripping, firsthand account, Daniel Green tells the story of U.S. efforts to oust the Taliban insurgency from the desolate southern Afghan province of Uruzgan. Nestled between the Hindu Kush mountains and the sprawling wasteland of the Margow and Khash Deserts, Uruzgan is a microcosm of U.S. efforts to prevent Afghanistan from falling to the Taliban insurgency and Islamic radicalism. Green, who served in Uruzgan from 2005 to 2006 as a U.S. Department of State political adviser to a Provincial Reconstruction Team (PRT), reveals how unrealistic expectations, a superficial understanding of the Afghans, and a lack of resources contributed to the Taliban's resurgence in the area. He discusses the PRT's good-governance efforts, its reconstruction and development projects, the violence of the insurgency, and the PRT's attempts to manage its complex relationship with the local warlord cum governor of the province. Upon returning to Afghanistan in 2009 with the U.S. military and while working at the U.S. Embassy in Kabul until 2010, Green discovered that although many improvements had been made since he had last served in the country, the problems he had experienced in Uruzgan continued despite the transition from the Bush administration to the Obama administration.
Visa hela texten

"The Valley's Edge is a moving, finely grained portrait of an American's efforts to understand and help Afghanistan from within a well-intentioned but often hapless U.S. bureaucracy. Dan Green's memoir of his tour as a civilian adviser in Uruzgan Province makes a signal contribution to the literature on the war and in particular to understanding the role of this southern Pashtun province in the ongoing conflict. It is ground-level, first-person history at its best."--Linda Robinson, author of Tell Me How This Ends and Masters of Chaos--Linda Robinson "You've read the theory of counterinsurgency--now see it in practice. Dan Green's memoir is a bracing account of the hazards of state-building in Afghanistan."--Nathan Hodge, author of Armed Humanitarians--Nathan Hodge "Dan Green has provided us with a rare and insightful look at the ground-level efforts for reconstruction in the dangerous south of Afghanistan. He cuts through the fog of war to give us a clear image of where we've succeeded, balanced by the honest assessment of where we have failed. Combine that with a civilian perspective of a man, not embedded with, but working alongside the U.S. and coalition forces, and what you have in your hands is a must read for anybody hoping to understand the hard realities of the war in Afghanistan."--Eric Blehm, author of The Only Thing Worth Dying For and The Last Season--Eric Blehm "A blunt, detailed account from the frontlines that describes why nation-building is so astoundingly difficult--if not impossible. A warning in bold, human terms about the stultifying effects of military and civilian bureaucracies, no matter how well intentioned they are."--Bing West, former assistant secretary of defense and author of The Village, The Strongest Tribe, and The Wrong War--Bing West "Dan Green provides a unique and insightful perspective on the war in Afghanistan. He takes a sympathetic but critical look at our efforts there and the challenges that remain for the U.S. to prevail in Central Asia. If you want to know what Americans are doing in Afghanistan, read The Valley's Edge."--Amb. James Dobbins, special envoy for Afghanistan--Amb. James Dobbins "Dan Green spent a fascinating year in the heart of Taliban country as the insurgency began to gather steam there. His valuable book is a rich and detailed assessment of what worked (and what didn't) to pacify Uruzgan, one of the most dangerous and remote provinces in Afghanistan."--Peter L. Bergen, author of The Longest War: The Enduring Conflict between America and al-Qaeda--Peter L. Bergen

Daniel R. Green is a Soref Fellow at the Washington Institute for Near East Policy and is pursuing a PhD in political science at the George Washington University. For his work in Afghanistan in 2005-2006, he received the U.S. Department of State's Superior Honor Award, the U.S. Army's Superior Civilian Honor Award, and a personal letter of commendation from then - chairman of the Joint Chiefs of Staff Gen. Peter Pace. He has also received the Office of the Secretary of Defense's Exceptional Public Service Award and in 2007 served with the U.S. military in Fallujah, Iraq. He lives in Washington, D.C. Ronald E. Neumann, now president of the American Academy of Diplomacy, served previously as a deputy assistant secretary and three times as ambassador, to Algeria (1994-97), Bahrain (2001-4), and finally to the Islamic Republic of Afghanistan (2005-7). Prior to his stint in Afghanistan, Neumann, a career member of the Senior Foreign Service, served in Baghdad from February 2004 with the Coalition Provisional Authority and then as the embassy's principal interlocutor with the Multinational Command. He lives in Arlington, Virginia. Colonel H. R. McMaster, U.S. Army, is the author of Dereliction of Duty: Johnson, McNamara, the Joint Chiefs of Staff, and the Lies That Led to Vietnam