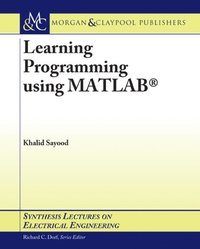 av Khalid Sayood
E-bok (PDF - DRM), Engelska, 2006-12-01
389
Ladda ned
Spara som favorit
Laddas ned direkt
Läs i vår app för iPhone, iPad och Android
This book is intended for anyone trying to learn the fundamentals of computer programming. The chapters lead the reader through the various steps required for writing a program, introducing the MATLABr(R) constructs in the process. MATLABr(R) is used to teach programming because it has a simple programming environment. It has a low initial overhead which allows the novice programmer to begin programming immediately and allows the users to easily debug their programs. This is especially useful for people who have a &quotemental block&quote about computers. Although MATLABr(R) is a high-level language and interactive environment that enables the user to perform computationally intensive tasks faster than with traditional programming languages such as C, C++, and Fortran, the author shows that it can also be used as a programming learning tool for novices. There are a number of exercises at the end of each chapter which should help users become comfortable with the language.
Visa hela texten